The 36 People You See at Every Supermarket -

The 36 People You See at Every Supermarket Going to a supermarket in this day and age can be a confusing endeavor — all manner of new foods and food groups keep popping up to confuse you, and the women are impervious to flirtation (usually). Add to this the fact that the aisles are almost always filled with a cast of characters that rivals the best-written sitcoms, and you’ve got a recipe for mass hysteria. So, to help you navigate more efficiently from the greeter to the totally unpopulated self-checkout line, here’s a list of all the people you’ll see during your next visit. Twenty-Something Suddenly Realizing He Can Eat Cereal for Every Meal
You can usually find him haphazardly emptying out the other contents of his cart to make room for more Cookie Crisp, and then talking to the cashier about his “kids”.

Produce Section Curator
The way he arranges the kiwis might be nice to look at, but it needs a more solid foundation. Most likely a frustrated art school dropout/graduate.

Obsessive Coupon Clipper
Usually spends a couple hours before shopping aggressively leafing through three or four books of coupons. She’s so into savings that she’ll probably end up buying three boxes of string cheese even though it makes her really gassy. But oh the savings!

Old Lady Buying a Ton of Cigarettes
She’s reached the 14-item limit for the express line, but all of the things she’s buying have the Surgeon General’s warning label on them. She’s probably seen more than a few Surgeons General come and go.

Mute Clerk
Somehow, this grumpy-faced cashier managed to check out your entire order, take your card for payment, and ask you whether you wanted paper or plastic — all without actually opening his mouth… except to breathe loudly.

Person Actually Signing Up for the Rewards Program
There is probably a better time than this to join their members-only 1%-off club than during a rush while there’s only one lane open. And I’m pretty sure the cashier’s lame pitch was intended to be a joke. Paralyzed Ice Cream Browser
The ice cream selection is pretty huge, we’ll admit, but generally things are frozen inside of the display case instead of in front of it. OOH, FREEZER BURN!

Overly Chatty Clerk
He has a joke for everything you’re buying, forcing you to debate ditching that box of Tucks Medicated Pads in the candy rack before he gets to them.

Disinterested Teenage Stock Boy
Probably spends a lot of time spacing out on the loading dock out back.

Disinterested Middle-Aged Stock Boy
Definitely spends a lot of time spacing out on the loading dock out back, talking about B.O.C.’s back catalog.

Grumpy Butcher
No person in the entire supermarket is more terrifying than this cleaver-wielding fellow, whose enthusiasm for chopping meats (and nothing else) makes your request for a quarter-pound of extra-thin turkey seem pretty trivial.

Free Sample Snatcher
This person is taking flagrant advantage of the courtesy of the supermarket by actually subsisting on free samples. Probably has a clandestine lair inside a hollowed-out beer display, full of spent toothpicks. Comes back to the counter several times during the day wearing different clothes. 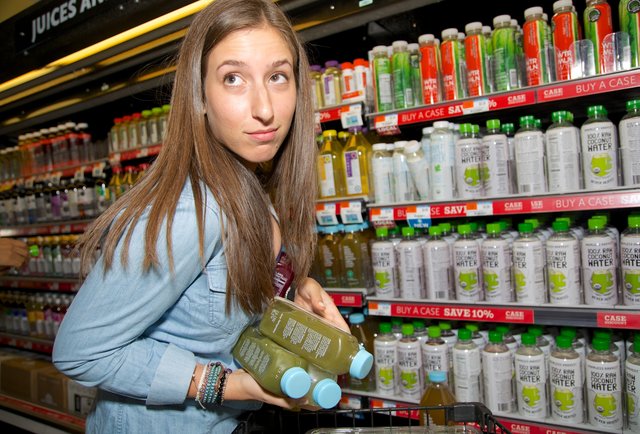 Definitely-on-a-Juice-Cleanse Girl
Her cart is filled with fruits, vegetables, juice, and nothing else. The air around her is filled with smugness. Her eyes are filled with disdain for your Cheetos. Soon you will be filled with Cheetos, and so will her thoughts.
Express Lane Disregarder
Either he: a) can’t count, in which case we lament the state of this nation’s schools, or b) willfully and flagrantly disregards supermarket law, in which case we will bring this up with… never mind.
Express Lane Mussolini
You’d think this guy works for the supermarket, given his sensitivity to the efficiency of foot traffic in the lane area. But he doesn’t. That doesn’t stop him from yelling at lots of people, though.
Lonely Sushi Counter Dude
All his sushi chef friends got jobs at big restaurants, and here he is in Super Foodtown. You are rightfully suspicious of his Philadelphia roll. 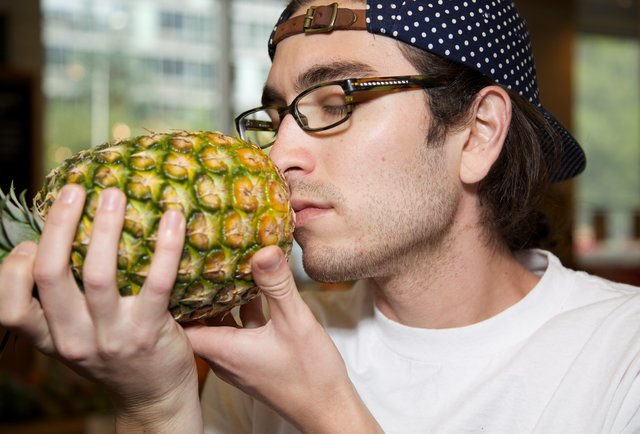 Fruit Masseuse
We understand that you’ve probably read a bunch of articles about how to select the best peaches, but that doesn’t mean you have to gently caress/stroke/listen to every one in the pile. Also, you’re ruining the Produce Section Curator’s finest work.
Old Person Who Needs Help
This woman has top-shelf tastes, which is pretty unfortunate since she needs a low-riding scooter to get around. If you’re walking near her, chances are she’ll put on a sweet act and appeal to your strapping nature to get that jar of gourmet gherkins she longs for.
Woman Who’s Given Up Trying to Control Her Kids
How many kids does this woman have?! They’ve established an anarchic commune in the bread aisle while she slowly peruses the whole-wheat options, and they aren’t letting anyone through unscathed. There is a trail of smashed Wonder Bread in her wake.
Produce Sneezer
Right next to the nectarines?! Who the hell is allergic to nectarines?!
Broken Scanner Dad
Everyone’s Dad has made the joke at one point or another that if an item doesn’t scan at the register, it’s free. They can never be stopped from doing this.
Deli Counter Number Ignoramus
Jostling through the hordes at the deli counter to assert themselves at the sneeze guard, this person has no idea that there is a clearly maintained order system in place via the ticket machine. He’ll smile and be apologetic when he finally learns about the system, but there is a quiet, seething rage underneath. Probably a sociopath. 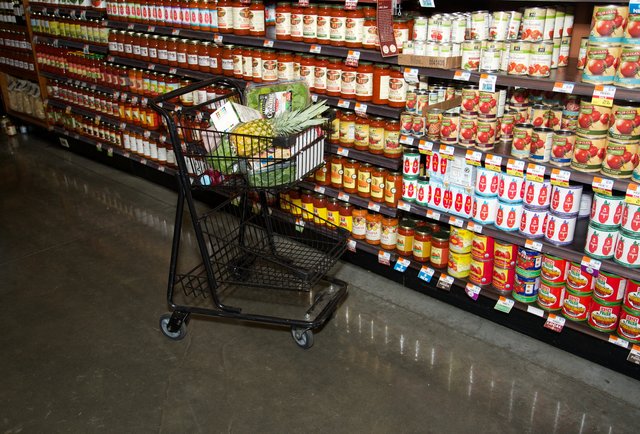 Cart Abandoner
Whose cart is this? It’s loaded with stuff, and the aisle is completely deserted. Did the owner suddenly transcend the need for bodily nourishment? So many questions.
Person Paying with a Check
The bane of every cashier’s existence is a living nightmare if you’re behind them in checkout. This person will probably go home and watch The Cable Guy on VHS completely unironically. Usually followed in line by the Extremely Loud Sigher.
Extremely Loud Sigher
See above.
Self-Checkout Attempter
This person is most likely older and considers himself very brave and “with it” for trying to use the self-checkout. He will fail, both because the self-checkout is terrible and because he is buying nothing but produce.
Teenager Buying Condoms
Cannot possibly be older than 14. Extremely nervous-looking. Might be doing this on a dare.
Clerk Making Jokes About Condoms
You’re making everyone nervous with your supposed good-natured ribbing about ribbing of another kind. And you already cost somebody hemorrhoid relief earlier. 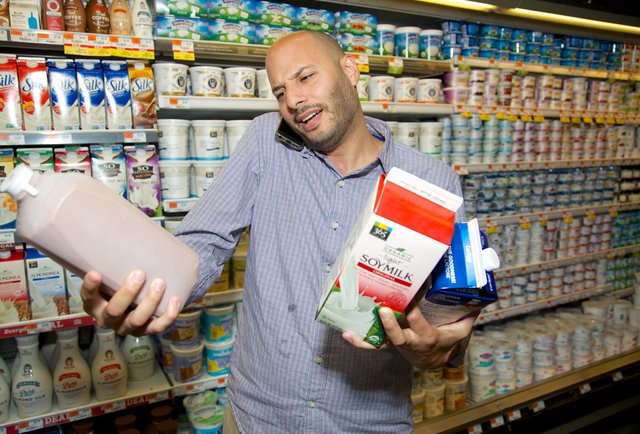 Confused Husband
Undisputedly the sweatiest inhabitant of the supermarket, this unfortunate soul has no idea which “non-dairy milk” his wife meant when she scribbled it on the list, and is calling up all of his family members to find out whether she’s more of a soy or an almond person, when in actuality she meant coconut. He is unavoidably doomed.
Assuredly Stoned Guy Checking Out the Chips
He was there when you got to the supermarket, and he’ll be there when you leave.
Small Family with Three Full Shopping Carts
Wait, was there an emergency alert we’re unaware of? If so, this family’s bunker’s gonna be incredibly well-stocked. Become good friends with them.
Depressing Haul Guy
A cursory glance into his basket reveals: a six-pack of cheap beer, a box of mini powdered donuts, some Stouffer’s Meals for One, an extension cord, and a pulp romance novel.
Expired Coupon Fanatic
Despite the fact that her coupon is from 2007, she’s insistent that it still be honored, and is thus holding up the entire line by berating the cashier.
Parents Using Kids to Get Extra Items While They’re in Line
Oh, would you look at that! They “realized” that they “forgot” certain items on their list right when they were about to check out, so they’ve sent their kids around the supermarket to collect the missing items. The kids will return with the wrong ones and be sent out again, while everyone behind them invariably gets turned into Extremely Loud Sighers.
Rick
He’s here?! Love that guy!
Sourced from thrillist.com