Chipotle workers in State College, PA, are living the daydream of every frustrated employee.

The fast food establishment’s staff was so fed up with their working conditions that they simply turned off the lights, closed the door and walked out. The restaurant remained closed for hours on Wednesday.

Ask our corporate offices why their employees are forced to work in borderline sweatshop conditions… People > Profits.

Chipotle spokesman Chris Arnold issued a statement, saying that a minority of the staff chose to speak for them all.

A few employees quit, locking out a majority of others who are enthusiastic to return to work.

Brian Healy, the restaurant’s manager, told State College that the working conditions were truly disgraceful. The Mexican food chain markets itself as transparent, fair and progressive. On the contrary, Healy called conditions at the restaurant “heinous.”

I just want to see people treated better. We’re not trying to start a strike or anything like that.

The restaurant reportedly re-opened its doors later that day. The incident happened just days after fast food workers picketed for better wages in three dozen cities across the country.

Video.. The Best and Worst Places to Be a Fast-Food Worker

Fast food is enduringly popular in America, but workers at places like McDonald’s and Taco Bell barely make a living. Here’s what the data reveals about fast-food wages in each state—some are worse than others. 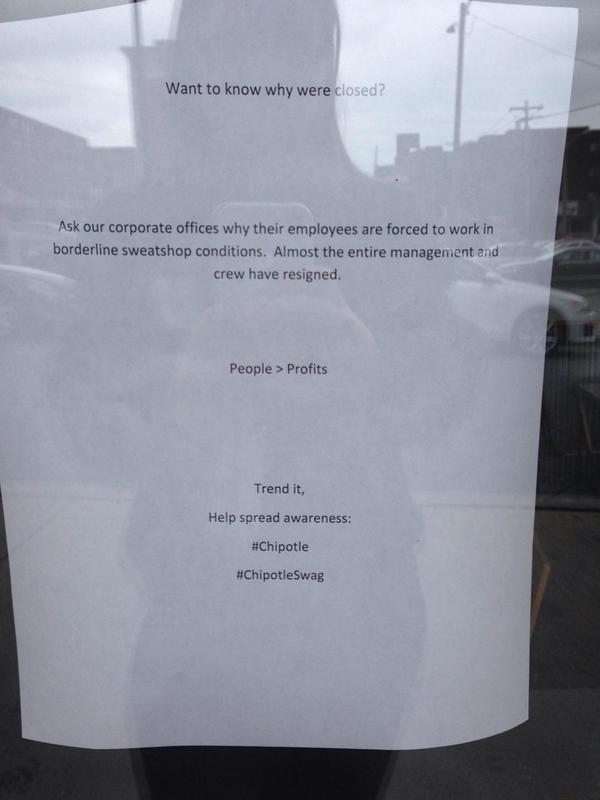