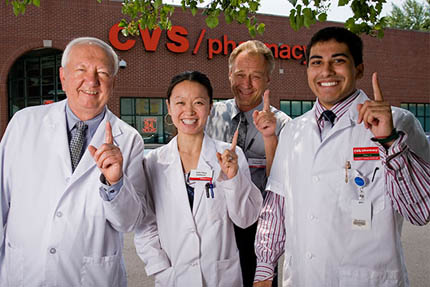 One Thing I’ve Learned About CVS Employees. They Really Seem To Hate CVS.

I mean really hate CVS. Every company has its disgruntled and malcontents, and I’ve found those types can be useful ones to seek out when I’m writing about drugstore shenanigans. But man, every time I put out a call for people willing to give me the skinny on these guys, I am inundated with volunteers. No other company even comes close.

And now, I don’t even have to go seeking. This email from a CVS employee showed up completely unsolicited. I know every company has executives that like to play business hardball, but it’s becoming clear that this company is distinguishing itself in an industry that seems to take pride in treating its employees like shit.

Of course I could be wrong. Having given space to this employee, I’ll happily give more to anyone who would like to pen a rebuttal. Anyone who’s itching to tell the world all the great things CVS is doing to advance the profession, or even just how they aren’t as bad as the other guys.

The offer is open. There’s an email link to the right of this page where it says “tell me what you think”

Without further delay, from a CVS employee. Complete and unedited.

I open this post with a quote from Hunter S. Thompson:


“In a closed society where everyone is guilty, the only crime is getting caught. In a world of thieves, the only final sin is stupidity.”


Why do I quote Thompson when talking about CVS, or indeed any Corporate Pharmacy? Because we live in a culture that silently condones cheating and fudging to make the numbers look good. If you work in retail, you know what “The Numbers” are. If you don’t, I won’t waste time explaining it. If you google “Triple S” or “Key Pharmacy Metrics” you’ll get it. Let me get to the heart of what’s wrong with CVS’s culture of numbers:


If a store is not selling enough scripts (notice I didn’t say filling), getting high enough ratings on the Triple S/KPM, or their inventory is out of whack in any way – they get endless hassles from district. This forces stores to do whatever necessary to make themselves look good. Refilling scripts without asking patients, filling dubious CII scripts to make their script budgets so they can maintain staff levels, and literally stealing receipts to boost their customer survey scores. This sort of thing is ignored by the higher ups because it boosts the district’s numbers, until someone blows the whistle. I’ve seen Pharmacists fired not because they were cheating at the scores, but because they slipped and forgot to cheat one month and made it far too obvious that they were doing so.


Notice that it wasn’t a manager or district supervisor who called attention to the CVS stores in Sanford, FL who were filling ridiculous scripts for Oxycodone and other narcotics from pill mill doctors. They were tickled pink and the gobs of money that were coming out of these stores. If a technician hadn’t blown the whistle and called attention to what was going on, it would still be happening and those stores would still be the most profitable ones in the area. Once it was out, CVS immediately sent emails to every store with instructions that no one at any level talks to the press. CVS associates are to forward all requests to some yahoo in the corporate PR office (Head of Media Relations or some such nonsense). Everytime we see that email, we know that something’s gone wrong again for CVS somewhere in the country. We’ve seen that email more in the past 4 months than in the previous 2 or 3 years combined. The CEO and everyone high up in management said the same thing, “It was irresponsible of these people to accept these dubious scripts and to keep filling them. They did so in contravention of CVS policy.” Policy that was quickly changed from “Fill the scripts, or you’re fired!” to “We stand behind you. Don’t fill scripts that you think are improper or outside the standard of care.” shortly after this story hit the airwaves.


Pharmacists used to be able to simply wave these people off by saying that it was out of stock, but now that’s been abolished too. The policy changed again, “You can only say you’re out of stock if you are legitimately out of stock. Otherwise you have to explain to the customer that you cannot verify the script and will not be filling it because in your professional opinion…” et cetera. Why? We were never given a real reason. My theory is that it’s a way of ensuring that these people end up at our competition rather than another CVS. Maybe it’s some sort of reverse Honeypot trap, trying to get Walgreens or Rite-Aid to fill a pill mill script and get them nailed to the wall instead.


Going back to that earlier point, about people being fired for not filling scripts they thought were bogus? Not an exaggeration. Customers would complain to corporate and demand the Pharmacist give a full explanation why they would not fill the script. These dressing down sessions would end in a filled prescription for the patient and a gift card for their inconvenience.


The culture of numbers is to blame for the CVS stores in Sanford filling those bogus scripts. That culture is also responsible for CVS’s outside vendor of scripts Cardinal Health losing the DEA license at their Lakeland warehouse for providing those stores with the narcotics. Now CVS has to appeal and fight to have those stores’ DEA licenses restored. At the same time they’re fighting to fix these two stores, they’re going to close two completely legitimate stores in other locations that do good business for their communities.


It sucks to work for a company with such a warped sense of priorities, but what can you expect from a retail company that sees pharmacy only as a way to make money? A store doesn’t make it’s RX Script budget by filling scripts, but only by ringing them through the register. ‘Did you fill 4500 scripts this week, while lacking two technicians? Well, you only rang 1950, so we’re cutting your hours again. You’ll have to let someone go. What’s that? You won’t be able to cope with the extra workload? I’m sure you can go somewhere else then and we’ll get someone who can, and boost your store’s Triple S at the same time. Bye!’


It’s disgusting, and we’re stuck with it.