Scroll down for Video….. Its a fairly old article from 2009 but Totally Gross. 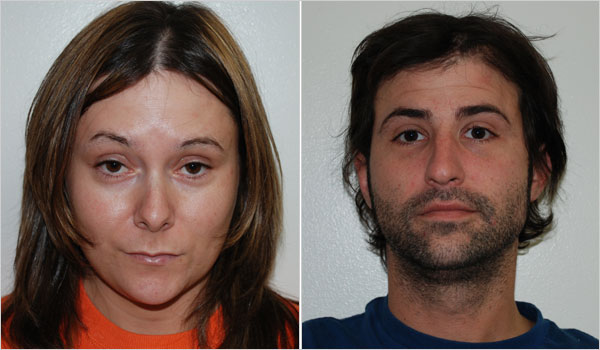 Online comments helped the police identify Kristy Hammonds and Michael Setzer as the makers of a troubling kitchen video.

In videos posted on YouTube and elsewhere this week, a Domino’s employee in Conover, N.C., prepared sandwiches for delivery while putting cheese up his nose, nasal mucus on the sandwiches, and violating other health-code standards while a fellow employee provided narration.

The two were charged with delivering prohibited foods.

By Wednesday afternoon, the video had been viewed more than a million times on YouTube. References to it were in five of the 12 results on the first page of Google search  for “Dominos,” and discussions about Domino’s had spread throughout Twitter.

As Domino’s is realizing, social media has the reach and speed to turn tiny incidents into marketing crises. In November, Motrin posted an ad suggesting that carrying babies in slings was  a painful  new fad. Unhappy mothers posted Twitter complaints about it, and bloggers followed; within days, Motrin had removed the ad and apologized.

On Monday, Amazon.com apologized for a “ham-fisted” error after Twitter members complained that the sales rankings for gay and lesbian books seemed to have disappeared — and, since Amazon took more than a day to respond, the social-media world criticized it for being uncommunicative.

According to Domino’s, the employees told executives that they had never actually delivered the tainted food. Still, Domino’s fired the two employees on Tuesday, and they were in the custody of the Conover police department on Wednesday evening, facing felony charges.

But the crisis was not over for Domino’s.

“We got blindsided by two idiots with a video camera and an awful idea,” said a Domino’s spokesman, Tim McIntyre, who added that the company was preparing a civil lawsuit. “Even people who’ve been with us as loyal customers for 10, 15, 20 years, people are second-guessing their relationship with Domino’s, and that’s not fair.”

In just a few days, Domino’s reputation was damaged. The perception of its quality among consumers went from positive to negative since Monday, according to the research firm YouGov, which holds online surveys of about 1,000 consumers every day regarding hundreds of brands.

“It’s graphic enough in the video, and it’s created enough of a stir, that it gives people a little bit of pause,” said Ted Marzilli, global managing director for YouGov’s BrandIndex.

The Domino’s experience “is a nightmare,” said Paul Gallagher, managing director and a head of the United States crisis practice at the public relations firm Burson-Marsteller. “It’s the toughest situation for a company to face in terms of a digital crisis.”

Mr. McIntyre was alerted to the videos on Monday evening by a blogger who had seen them. In the most popular video, a woman who identifies herself as Kristy films a co-worker, Michael, preparing the unsanitary sandwiches.

“In about five minutes it’ll be sent out on delivery where somebody will be eating these, yes, eating them, and little did they know that cheese was in his nose and that there was some lethal gas that ended up on their salami,” Kristy said. “Now that’s how we roll at Domino’s.”

On Monday, commenters at the site Consumerist.com used clues in the video to find the franchise location in Conover, and told Mr. McIntyre about the videos. On Tuesday, the Domino’s franchise owner fired the employees, identified by Domino’s as Kristy Hammonds, 31 and Michael Setzer, 32. The franchisee brought in the local health department, which advised him to discard all open containers of food, which cost hundreds of dollars, Mr. McIntyre said.

Ms. Hammonds apologized to the company in an e-mail message  Tuesday morning. “It was fake and I wish that everyone knew that!!!!” she wrote. “I AM SOO SORRY!”

As the company learned about the video on Tuesday, Mr. McIntyre said, executives decided not to respond aggressively, hoping the controversy would quiet down. “What we missed was the perpetual mushroom effect of viral sensations,” he said.

In social media, “if you think it’s not going to spread, that’s when it gets bigger,” said Scott Hoffman, the chief marketing officer of the social-media marketing firm Lotame.  “We realized that when many of the comments and questions in Twitter were, ‘What is Domino’s doing about it’ ” Mr. McIntyre said. “Well, we were doing and saying things, but they weren’t being covered in Twitter.”

By Wednesday afternoon, Domino’s had created a Twitter account, @dpzinfo, to address the comments, and it had presented its chief executive in a video on YouTube by evening.