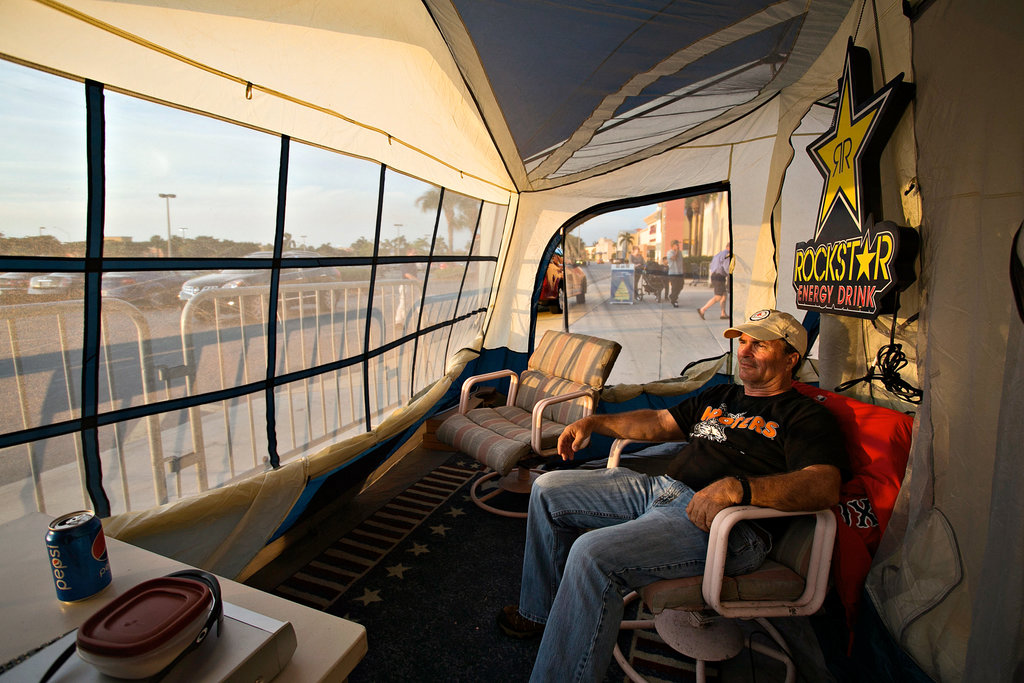 By spreading its doorbuster specials over five days this year, Walmart may have thought it was sounding the death knell for the annual shopping frenzy known as Black Friday.

After all, in the era of one-click Internet shopping, who really wants to wait in line overnight, or even multiple days and nights, to get first crack at the deepest discounts?

Mr. De Armond, 55, set up a tent at 10 a.m. on Nov. 11, more than two weeks beforeThanksgiving. He and three teammates, who rotate through the tent to hold their place, are first in a growing line outside a Best Buy in Fort Myers, Fla., that will open its doors at 5 p.m. on Thanksgiving Day.

Critics of the Black Friday shopping frenzy and early store openings on Thanksgiving have complained that they threaten the traditional holiday.

But for consumers like Mr. De Armond, the pre-Black Friday line has become a Thanksgiving tradition that’s every bit as important as — and more fun than — the turkey dinner.

“It’s like a tailgate party at a football game,” Mr. De Armond told me this week. “We barbecue every night. We invite people in; we’ve made new friends.”

And he and his teammates and his two sons will be sitting down for a traditional turkey dinner — inside the tent. One son will be home from military service in Afghanistan. The other, a high school student, “is embarrassed and doesn’t want any part of this, but he’ll be here for dinner,” Mr. De Armond said.

Mr. De Armond dismissed Walmart’s efforts to diminish the importance of Black Friday, which has thrived despite previous attempts by retailers to change or rebrand it. After all, “black,” when used as an adjective affixed to a day of the week, hardly has a positive connotation — it has traditionally applied to catastrophes like the stock market crash of 1929.

Research by a member of the American Dialect Society, Bonnie Taylor-Blake, suggests that black was first applied to the day after Thanksgiving by the Philadelphia police to describe the traffic jams afflicting Philadelphia’s downtown shopping district in the early 1960s.

In an effort to put a more positive spin on it, retailers campaigned to rename it “Big” Friday, but when that failed to stick, they floated the apocryphal notion that it’s the day when retailers begin to show a profit.

Despite the efforts of Walmart and some other retailers, “Black Friday is always going to be Black Friday,” said Melissa Martin, a spokeswoman forBlackFriday.com, an website that Mr. De Armond consulted to identify this year’s best deals. “It’s not going away. It’s a tradition in my family to get together and head out shopping on Black Friday, and I think that’s the case for many people. A lot of people love camping out. It’s an experience. But for people who don’t want to stand in lines, or want to shop online, there are going to be more opportunities to score deals.”

As is the case for many Americans, Black Friday brings out Mr. De Armond’s competitive streak, which is one of the reasons retailers offer only a limited number of their best deals.

Four years ago, he arrived at 6 p.m. for a midnight Thanksgiving opening and found hundreds of people ahead of him. The next year, he arrived a day early, and still wasn’t able to get the advertised doorbusters. Two years ago, he put up a pup tent.

This year, he made camp earlier than ever, determined to stake out a position at the head of the line. “People have tried to slide in ahead of me, but I’m basically sending the message, don’t even try,” Mr. De Armond said.

Much as the Pilgrims overcame adversity, Mr. De Armond has elevated the usually mundane task of waiting in line into something akin to performance art. This year, his tent has three rooms and is equipped with air-conditioning, a screened porch, a hammock, a 42-inch flat-screen TV, a tiki bar and a fully decorated Christmas tree. “We’ve kind of gone crazy wild with it,” Mr. De Armond said. The only creature comfort lacking is a bathroom — Mr. De Armond still has to shower at home.

He said a few people had taunted him, saying he should get a job, but he has one as a press operator at The News-Press in Fort Myers. He leaves the holiday encampment for work. (His team must have a member present 24 hours a day to hold its place.)

The deals Mr. De Armond is aiming for seem almost an afterthought: He’s going for an iPad Air 2 for $399 (list price $499) and a Panasonic 50-inch LED TV for $199 (list price $799.99). The iPad is a gift for one of his sons, and he plans to donate the television to a local children’s hospital for a fund-raising raffle.

One reason he chose Best Buy, he said, is that the store hands out vouchers shortly before the store opens, guaranteeing availability. That eliminates any need for the kind of stampede that has put shoppers at risk of injury. “At Best Buy, there’s no reason to fight over anything,” Mr. De Armond said.

A Best Buy spokesman confirmed that chain employees would hand out tickets to people in line starting about two hours before stores open. This weekend, the chain is staging Black Friday simulations so employees can practice. “We’re committed to the safety of our customers and employees,” Jeff Shelman, the spokesman, said.

Best Buy is also committed to the concept of Black Friday, and is featuring some of its best deals — like the iPad and Panasonic TV Mr. De Armond wants — from 5 p.m. on Thursday to 1 a.m. on Friday. Stores will then close and reopen at 8 a.m. with a new set of deals.

While he didn’t want to comment on Walmart’s strategy, “We have a lot of customers who really like Black Friday and look forward to it.” Mr. Shelman said.

Still, like Walmart, Best Buy is also catering to shoppers whose idea of fun isn’t Thanksgiving dinner in a parking lot. Mr. Shelman said Best Buy would feature some online deals even before Thanksgiving and would save some specials for the following Monday, known as Cyber Monday. “We’ll be offering deals throughout the period,” he said.

For shoppers, the holiday retail landscape has become so competitive and complicated that BlackFriday.com is offering an app that provides constant email pricing updates as well as the lowest prices available for items on a customer’s wish list throughout the holiday season. “There are going to be some great deals heading into December,” Ms. Martin said.

Thanks to higher employment rates and lower gas prices, many consumers have more money to spend this year. But slow wage growth since the financial crisis has kept them extremely price conscious — an ideal environment for targeted specials like those on Black Friday.

In a statement, Jack Kleinhenz, chief economist for the National Retail Federation, said, “Consumers are in a much better place than they were this time last year,” but “shoppers will still be deliberate with their purchases, while hunting for hard-to-pass-up bargains.” The federation is predicting healthy holiday sales growth of 4.1 percent, to $616.9 billion.

Mr. De Armond said he’s enjoying himself so much that he’ll be sorry when Black Friday is over. But he doesn’t have to wait long to relive the experience. Season tickets for Red Sox spring training games, always much in demand, go on sale at JetBlue Park in Fort Myers on Dec. 6.