As a nation we each spend an average of £25-30 per week on fast food, it’s big business.

We spoke to a number of current and former fast food workers to get their advice on what to eat, what NOT to eat, and even how to get free food.

(These are people’s personal experiences in individual franchises and they have not suggested that the practices were widespread or sanctioned by management).

“It’s easy to get free food”

“If you complain about food then getting replacements is very very easy, even if you have eaten most of it.

“We did have one guy skip the drive-through queue straight to window three and collect the car behind him’s order!

“You could phone up and complain about a drive-through order, and they would write you down for a free meal or however many meals you ordered, no proof necessary. The food costs them so little to make, they don’t need to argue.”

“It’s all based on a time card system, the food should stay in the production bin (the hot shelf) for something like 20 mins, but it tends to stay there until it’s sold.

“For most things that’s not a problem but late at night that can be pretty bad.”

“DON’T order anything that they have ready and waiting”

“They do throw out stuff that has been there a while, though it’s usually quite limp and horrid long before that.”

“The milk sachets for your cups of coffee could have been left out for quite a while, as these are kinda hidden from view, so are often overlooked.”

“The main fry-station for fries could be pretty nasty – pretty sure I saw that get cleaned like once a week tops (the station where they scoop the fries out of), and the underside of it is caked in weeks old grime build up.”

“You roll a bit of a dice if you order pizza between 6 and 8, if it’s super busy and someone drops any of the metal pizza trays on the floor, there’s no time for someone to go round back and wash it, so they’ll just stick it through the oven with the pizzas.

“Grit’s not really the most enjoyable of toppings…”

“Fish burgers were cooked and kept hot in the kitchen. The fillets were not very popular so would sometimes stay there for ages. That’s the one thing I would never order.”

The 7 Videogame Bosses You’ll Have In Real Life

Target knows you’re a busy parent on the go, so when it comes to shopping, you don’t want to waste your time going from aisle to aisle to collect your kid’s toothbrushes, mouthwash and Fifty Shades of Grey marital aids. That’s why they put all of your needs into one place. They’re always thinking of you.

This picture, snapped by a reader in Tulsa, Oklahoma, is probably just a mistake, but also kind of genius. If your kids are using cute toothbrushes (useless for adults, by the way—I bought a singing Little Mermaid one and it did nothing for me) they probably don’t know what mommy and daddy (or any combination of parents) will be using the whips, chains and blindfolds for. 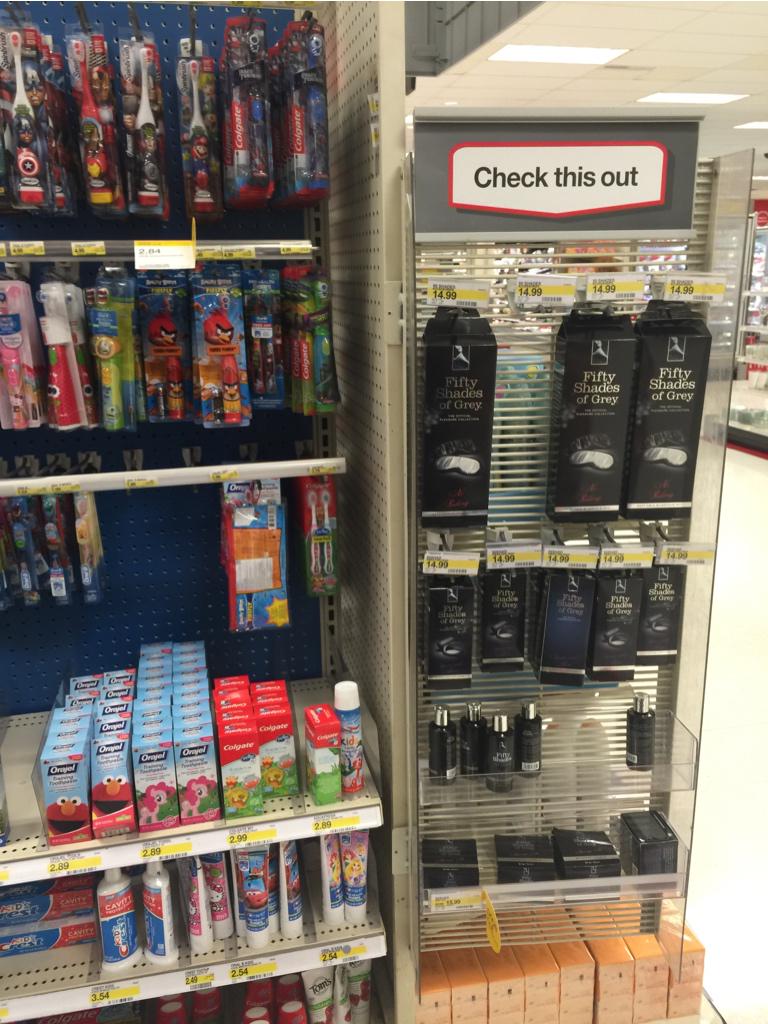 .@Target think you might want to move the vibrating cock rings a bit further from the children’s tooth brushes

The best part, of course, is that according to our tipster, there’s a huge sign screaming “check this out” like no one’s going to notice this display first thing. I would. I would be there picking shit over and cackling loudly in a heartbeat. Did you learn nothing from Play-Doh, Target?

My only real issue? $15 for a branded blindfold? Don’t you think that’s putting your guests into bondage that’s more financial than sexual? I’ll give you $4.99 and that’s my last offer.