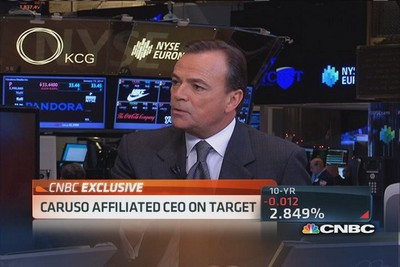 Get ready for the next era in retail—one that will be characterized by far fewer shops and smaller stores.
On Tuesday, Sears said that it will shutter its flagship store in downtown Chicago in April. It’s the latest of about 300 store closures in the U.S. that Sears has made since 2010. The news follows announcements earlier this month of multiple store closings from major department stores J.C. Penney and Macy’s.
Further signs of cuts in the industry came Wednesday, when Target said that it will eliminate 475 jobs worldwide, including some at its Minnesota headquarters, and not fill 700 empty positions.
Experts said these headlines are only the tip of the iceberg for the industry, which is set to undergo a multiyear period of shuttering stores and trimming square footage.
Shoppers will likely see an average decrease in overall retail square footage of between one-third and one-half within the next five to 10 years, as a shift to e-commerce brings with it fewer mall visits and a lesser need to keep inventory stocked in-store, said Michael Burden, a principal with Excess Space Retail Services.

Getty Images
“I believe we’re going to hear a lot more announcements in the coming months,” Burden said. It’s “an indication that there is a shift in the retail environment and it’s one that will continue.”
(Read more: 5 problems retailers must fix in 2014)
January is typically a busy month for retailers to announce store closings. According to the International Council of Shopping Centers, 44 percent of annual store closings announced since 2010 have occurred in the first quarter. But this year’s closings are likely indicative of a new trend, sparked by more and more shoppers turning to the Web, experts said.
This holiday, online spending increased by 10 percent on desktop devices—a number that will likely grow another 2 percentage points when factoring in the role of mobile devices, according to data tracker comScore. Paired with a compressed holiday shopping calendar and a spate of freezing weather across much of the U.S., online shopping contributed to a nearly 15 percent decline in foot traffic this past holiday season, according to ShopperTrak.
“Stores are making a long-term bet on technology,” said Belus Capital Advisors analyst Brian Sozzi. “It simply doesn’t make strategic sense to enter a new 15-year lease as consumers are likely to continue curtailing physical visits to the mall.”

Play Video
Future of American malls
Rick Caruso, Caruso Affiliated founder and CEO, discusses the future of American malls and explains what shopping malls need to do to become relevant again. “Retail brick and mortar has a great future,” Caruso says.
Sozzi said that after a profitable but below-expectations holiday season, the retail industry will face its second “tsunami of store closures across the U.S.,” only a few years after what he called the “fire sale holiday season of 2008.”
During the recession, the number of shopping center vacancies rose by 5.5 percentage points to 11 percent, according to ICSC data, and has since recovered only 2.1 percentage points.
In addition to J.C. Penney—which announced last week that it will close 33 stores—there are about a dozen retailers that still have too many stores, Sozzi said. Among them: American Eagle, which needs to move some of its aerie lingerie locations into its main stores; Aéropostale, which is on track to close 175 stores over the next few years; and Wal-Mart, which has about 100 stores in the U.S. producing same-store sales declines deeper than 3 percent, Sozzi said.
(Read more: JC Penney closing 33 stores, slashing 2,000 jobs)
As for Penney’s, Wells Fargo analyst Paul Lejuez said that its store closures are a step in the right direction, but they barely scratch the surface of how many are needed.
“With mall traffic trends very challenging and J.C. Penney facing its own significant company-specific issues, we do not believe a 1,000-plus store fleet is appropriate,” Lejuez said in a research note. “In our view, the company needs to close several hundred stores to operate more efficiently, but that is not easy to accomplish overnight.”
Retailers need a new approach
That’s not to say there aren’t a number of young retailers who still have plenty of room to build their store base, Lejuez said. Among them: Lululemon and the fashion-forward Michael Kors and Vince brands, which both recently went public. Kors, which increased its store base by nearly 100 stores last year, is on track to open 50 U.S. stores in 2014.
In a separate note, Lejuez said that the ideal way for young brands to build a retail business today is very different than it was 20 years ago. These days, he said, it makes more sense for a retailer to have half the number of stores they once thought appropriate, and instead concentrate on a small store network and e-commerce business. This will take time to accomplish, however, as the vast majority of store locations are leased and not owned, making them harder to unload, he said.
“There is often a mismatch between the number of stores retailers operate today compared to how many they would choose to operate if they had to do it all over again,” Lejuez said.
(Read more: Without rebirth, malls face extinction: Developer)
But it’s not just the number of stores that are shrinking—it’s also their size, said David Birnbrey, chairman of retail real estate advisory group The Shopping Center Group. As fewer shoppers buy items at the physical store, retailers don’t require the same inventory levels to be kept in an attached storage room.

By placing more of their stock in fulfillment centers, they can shrink their stores to cut back on commercial real estate expenses, Birnbrey said. Although retail rents are still well below where they were prior to the recession, they have begun to stabilize, and are expected to show a slight uptick in 2014, according to CB Richard Ellis.
“I think stores are typically downsizing right now, and I think they’re doing it because they had unsustainable inventory levels,” Birnbrey said.
Steering clear of traditional malls
One big shift in store closings has come from retailers shying away from indoor malls, instead favoring outlet centers, outdoor malls or stand-alone stores. Although new retail construction completions are at an all-time low, according to CB Richard Ellis, the supply of new outlet centers has picked up in recent quarters.
“There’s no question that mall stores are closing quicker than open air, as far as the department stores,” Birnbrey said.
(Read more: Showrooming left in the dust as shoppers go online)
Rick Caruso, founder and CEO of Caruso Affiliated, said at the recent National Retail Federation convention that without a major reinvention, traditional malls will soon go extinct, adding that he is unaware of an indoor mall being built since 2006.
“Any time you stop building a product, that’s usually the best indication that the customer doesn’t want it anymore,” he said.
But retailers aren’t throwing in the towel just yet. Turning brick-and-mortar shopping into a retail experience was one of the main topics discussed at the NRF convention this month, with retailers brainstorming ways to integrate targeted mobile couponing and high-tech gadgets to entice shoppers who may have been lost to the Web.
“They’re not giving up at all,” Birnbrey said.
—By CNBC’s Krystina Gustafson. Follow her on Twitter