Top 10 Ways to Make Your Cashier Hate You -

Top 10 Ways to Make Your Cashier Hate You

When in the business of customer service, you will certainly at one point have to deal with difficult people.  See Customer Service.  There are ways to survive these people, but why should us service slaves always have to put up with a person’s horrible manners?

THIS IS FOR YOU, DIFFICULT CUSTOMER.

YOU KNOW WHO YOU ARE.

Starting off our list, the number 10 way to get your cashier to hate you is by being dirty.  Handling money is gross already, but it’s even grosser when it comes out of your pocket soggy and smelling like sweat and compost.  I understand that sometimes after a long day landscaping or doing construction work, you might not feel like washing all the dirt under your nails but THIS is unacceptable: 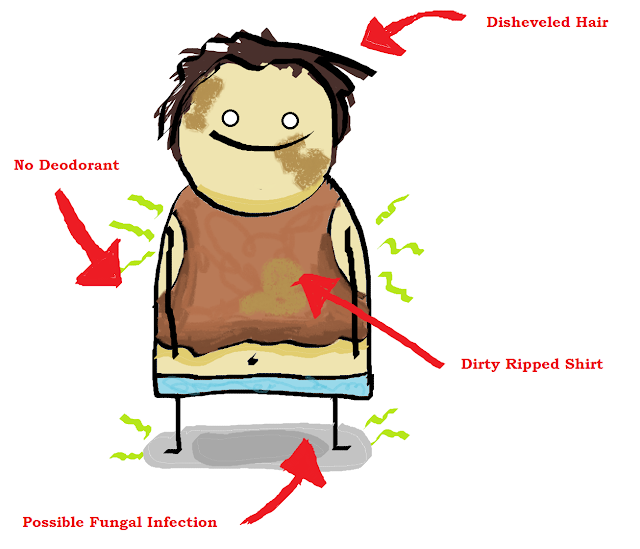 Your odor should not be so pungent that I can identify  which department of the store you are in.  Your clothing should not be so ripped that I have to revisit the no shirt no shoes no service policy.  In general, don’t be so dirty that I feel the need to rub hand sanitizer up to my elbows in order to avoid catching some strange disease.  Being dirty in any place where there is food or disease can easily be spread is unacceptable.

Number nine may not be a problem in other stores, but at my grocery store it totally is.  This is in part because both a real pen and an electronic pen are attached to POS machine.  But everyday someone new scribbles their signature on the touch pad with a real pen, and everyday another customer points it out like:
“Look!  Some idiot signed with a real pen!”

I think what bothers me most about this is the sheer ignorance people exhibit when they realize the are holding a real pen.  They look at it for a moment like: 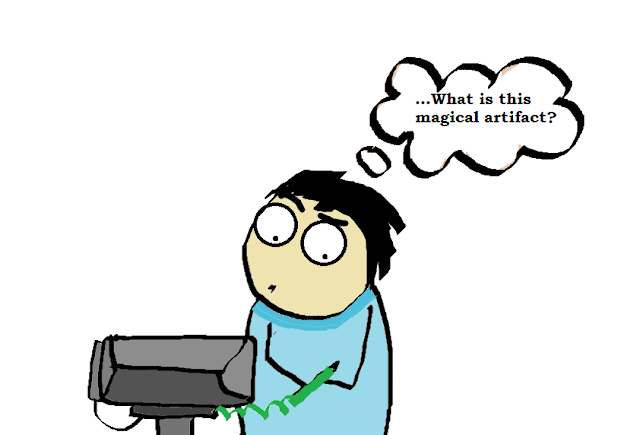 And then continue to write  with it as if they were completely unaware. 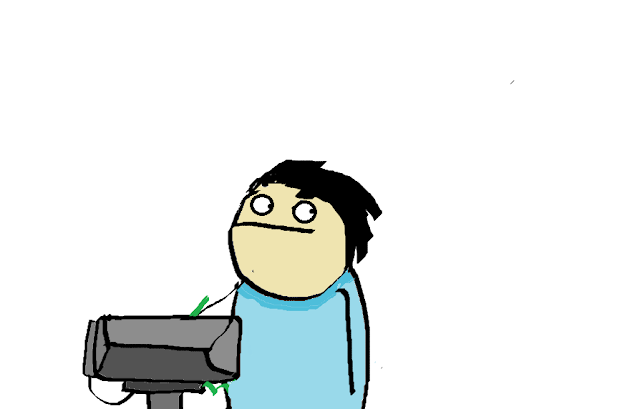 Eventually the signature pad becomes so scratched and covered in real ink that you can’t even read the prompts.  SO STOP IT AND PAY ATTENTION TO WHAT YOU’RE DOING.

I feel as though I have a sixth sense for couponers.  No matter what I’m doing. if an extreme couponer is within a five mile radius of me, I get shivers. 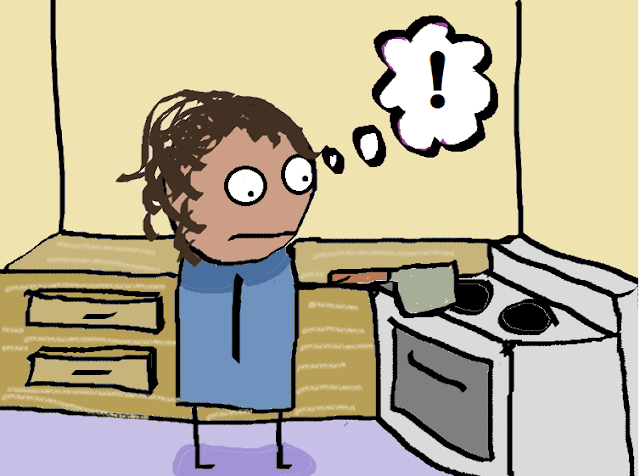 They come with an envelope full of coupons, totally prepared to get a 200 dollar order of diapers for 2 dollars.  It is a long, excruciating experience, seeing as many of the coupons don’t scan and I have to enter them in manually.  Occasionally it takes so long I have to shut off my light temporarily so that other customers aren’t deceived into thinking I’ll be done in a minute or two.  Because I won’t.  I never am.
Then comes the expired coupons that they insist on you taking.  And the coupons which are supposed to automatically double their prices.  When you refuse to do so, the coupon Nazi appears. 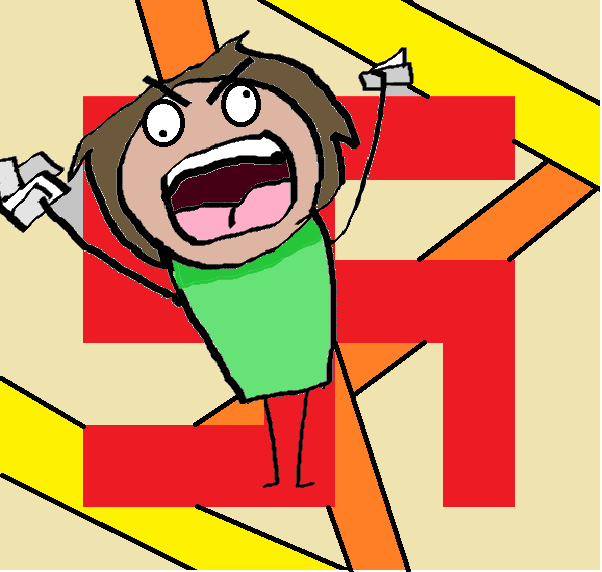 The coupon Nazi insists that your grocery chain accepted the coupons at another location and threaten to never come back and make you lose business.  Though really, it’s not like they’re paying for anything.

And when it’s all over, you just feel dirty.  Like you’ve participated in a robbery.  We cashiers don’t necessarily hate extreme couponers  We just hate coupon Nazis.

I once had a customer come through my line with three small children.  She bought two six packs of beer, a chocolate bar (for her,) and at least a dozen of other flavored alcoholic beverages.  She then proceeded to pay for the order with an EBT.  One of her children asked if she could by some Macaroni and Cheese, and the woman said,
“We don’t have any money.”
It makes me furious to see the way some people set their priorities.  It also infuriates me to see people using food stamps inappropriately.  These items are NOT for food stamps:

Energy drinks, alcohol, sodas, candy, junk food.  These aren’t foods for meals.  These are snacks.  You are using your EBT card inappropriately and I want to strangle you.

I don’t know what it is that makes my customers think that I have the final word over anything that goes on in the store, but it always seems to me that the cashier it always taking full blame for everything.  A customer will look at me sternly and proclaim that I really should change the price of bread if I want people to come back to the store.
I really don’t give a sh*t if you come back.
Let me break this down.  When a customer complains about something in the store that I have no control over, I imagine putting on a cape and whisking myself away to some, “Grocery Headquarters,” probably somewhere on a mountain where only employees who can fly, can reach them.  Hence it being my duty to fix this injustice.

Obviously at this point I bust in on corporate’s secret meeting to inform them of your shopping displeasure. 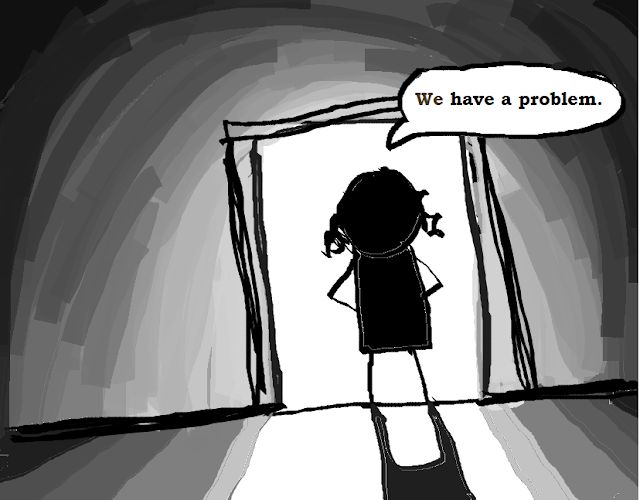 Unfortunately, this is not what happens.  And if you think I’m going to waste my time writing a letter that won’t be read to my superiors because you think your Frosted Mini Wheats cost too much, think again.  STOP BUGGING YOUR CASHIERS ABOUT PROBLEMS THEY HAVE NO CONTROL OVER.

Unless your significant other has just lost all of their arms and legs and is on fire, (or other similar emergencies,) if you come through my line chatting on your cellphone, I will loath you. 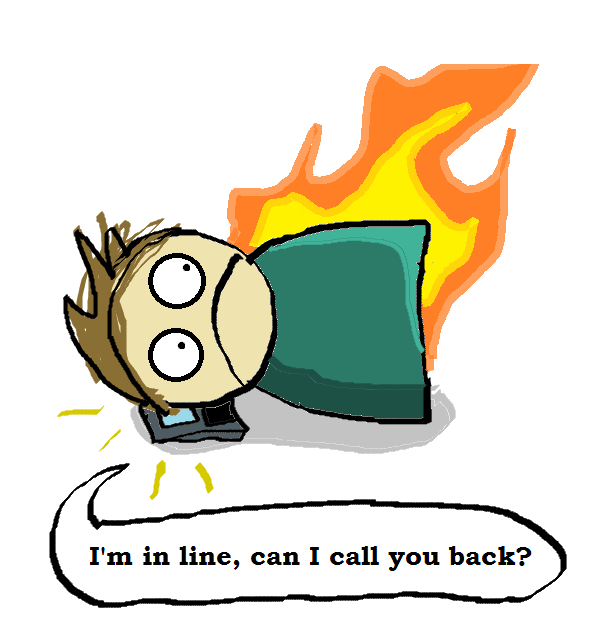 Here’s something no one’s said, ever: 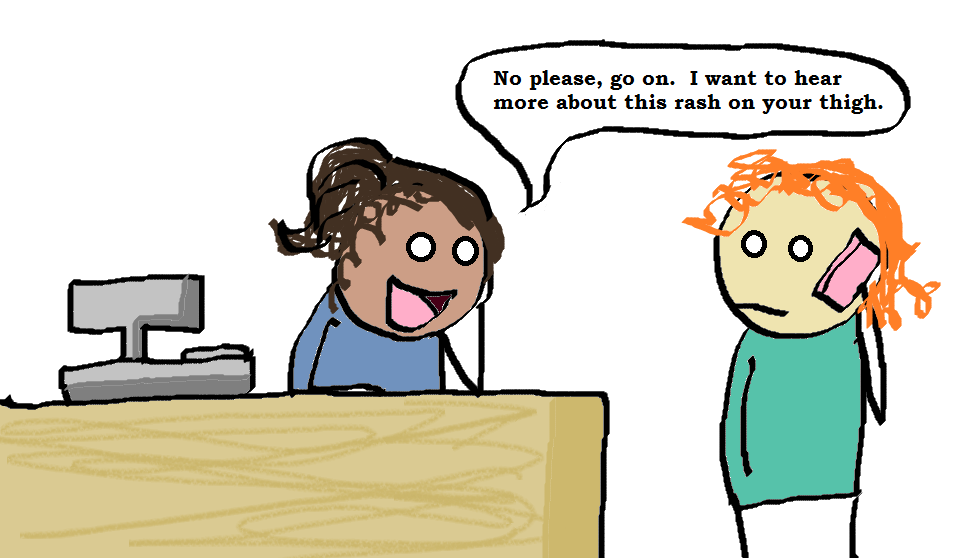 Talking on your phone while in line is just plain rude.  No one wants to be forced to be a part of your conversation and when either of is distracted the order will take longer and there is more room for error, (like writing on the POS with a real pen).  Please put the cellphone away.  It won’t kill you, I promise.

We’re climbing our way to the top folks.  Number 4 on the top 10 list of ways to make your cashier wish you were never conceived is by leaving your cart or basket by the register and taking off to grab that one item you forgot. 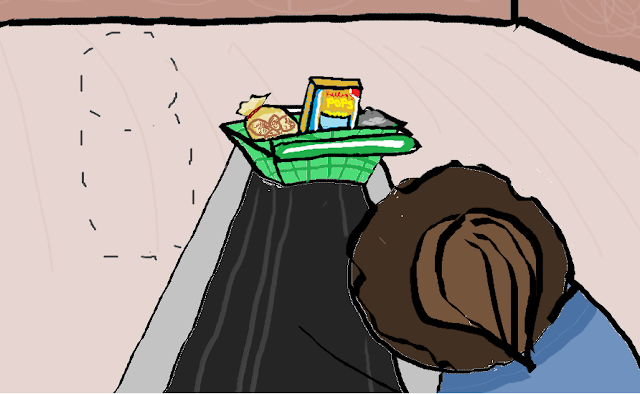 What usually ends up happening is the customer takes forever to come back and I’m forced to start the next order or be hung by impatient village people.  Then the customer comes back and is all like:

Well I set your stuff to the side.  Because you took too long.  Because you WEREN’T, in line.  And how do I know that you’re even coming back?  If you want your cashier to hate you, expect that we’re totally fine with you holding up the line and us taking the blame for it.

I don’t even want to draw this out because it’s pretty self exclamatory.  I am not paying attention to your every movement.  I am multitasking at a million different things when I’m doing an order, whether bagging, receiving money, scanning coupons, etc..  Therefore you have no reason to get angry at me if I don’t know where one order begins and the other ends if you DON’T USE THE DIVIDE BAR.
This dialogue does not take place in my head.
“…Hmm apples, cereal, milk, baby formula, bananas…Bananas?  What?  Impossible! This cannot be the same order, it is improbable!  This woman doesn’t want bananas!”
I once accidentally had a woman pay for a teen’s entire order because the teen didn’t use the divide bar and said nothing as the order went through.  The teenager then spoke up immediately after the credit card went through, getting mad because of the extra five minutes it took to refund the first woman her money.  The girl said:
“I thought it was obvious that the Gatorade was mine.”
No.  It’s not obvious.  We cashiers don’t have a magical bell in our head that alerts us where one order ends and another begins.

I see you coming with your full cart.  I see you stopping.

I know you saw the express light.  I know you’re pretending to be totally unaware.

Then you come on through with your cart like, “No big deal, I’m a special circumstance.”  And when you’ve finished unloading all of your groceries onto the belt you go. 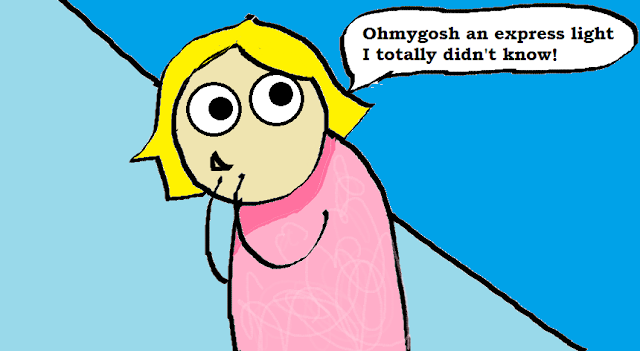 AAAAAND, the number one way to get your cashier to renounce their faith in humanity is to not know how much money you have spent on groceries.
The customer comes through your line with a full cart.  You know what’s coming when their hand is hovering above the belt and their eyes are glued to the total on the screen.  Then suddenly they say: 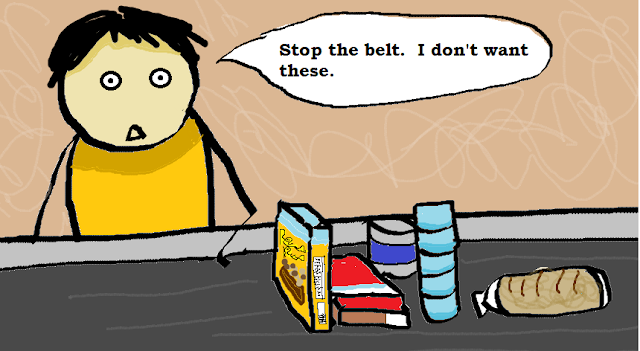 Which is totally awesome.  Because now, YOU get to put away the groceries they can’t afford.  You get to spend hours searching for the items they found and put them back on the shelf, because they couldn’t do simple addition in their head.  This is by far the worst, and most ignorant offense.
I see almost all of these offenses in a single day, and this only the top ten.  There are many other ways to make us cashiers feel like gum under your shoe, but it would take too long to write them all down.  And if you’re guilty of any of these offenses take a good long look at yourself in the mirror.
A GOOD.  LONG.  LOOK.
This is the top ten list of what you can do to make your cashier hate you.  OR, what you can not do to make you cashier love you.  Basically, just don’t be an inconsiderate jerk.
Sourced from wisebefore.blogspot.co.uk