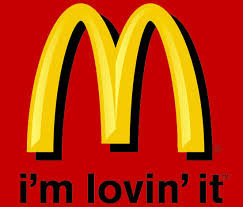 In a clip reminiscent of Jack Nicholson ‘s ‘Here’s Johnny’ scene in The Shining, he is seen kicking through the front entrance as staff try to keep it shut

This is the moment a guy with a beef kicks off in a McDonalds burger bar, leaving the glass door in pieces and staff running for cover from a pepper spray.

The man went berserk after being politely told to leave.

In a clip reminiscent of Jack Nicholson ‘s ‘Here’s Johnny’ scene in The Shining, he is seen kicking through the glass door as staff try to keep it shut before chillingly asking: “So you want to f*** my mother?”

As he sprays one security guard, another tries to force his him out of the fast food restaurant by hitting him with a yellow cone normally used to indicate a wet floor.

The clip, taken by a customer in a Galway branch of the franchise, looks terrifying – but one customer is so unruffled he can be heard asking for a cheeseburger amid the mayhem.

Two security guards had to be taken to hospital following the assault.

An onlooker in the store posted on a social media website: “Security had contacted the Gardai, and had closed the door to prevent further pepper spraying inside the premises. Mental!”

* Rafal Smolinski has been charged with criminal damage and public offences and is due in court tomorrow.