What Not to Do As a Retail Manager 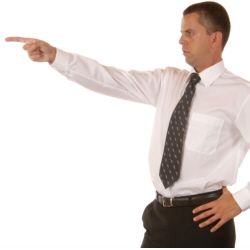 I’ve worked in retail for over 20 years (and still counting) and noticed that the mistakes retail managers make are fairly universal. This page covers some of the more prevalent problems I’ve encountered. It isn’t a “how to,” instead this page is a fair warning.

I received the following feedback in an email about this page. I think it sums it up nicely:
“99% of people HAVE to work but totally wouldn’t mind their jobs if not for the shi**y, retarded management!!”

This page is about common sense. People should be nice to each other, be honest, be restrained, be professional. And yet…

And yet the behavior of many retail managers is atrocious. All sections on this page come from personal experience or from the experience of my editor.

Okay, let’s stop making excuses. A manager must have credibility to do a competent job. Credibility extends beyond product information or the ability to build an endcap in 10 minutes or less. It is hinged upon how a manager is judged (yes, judged) as a person and leader by the people he or she is charged with leading.

The goal here is to shed some light on behaviors and traits that will destroy credibility.

Lying reduces morale, looses credibility, and creates a toxic system of communication. A manager that lies frequently will end up with a staff of liars. I’ve noticed that managers use lying to motivate through fear or put off their responsibilities.

One poor technique I’ve encountered in several retail environments is the “visit” lie. In order to motivate employees, managers will tell them that an executive visit is eminent. If everything on the work list is not done, trouble will result! This is a trick used to create a management style of fear.

Another trick I’ve seen is during job interviews. Managers will lie about a policy, like the mandatory background check that will tell them everything about the candidate’s past. This is used to discover dirty secrets. Some candidates will see this technique for what it is. If hired, the manager will have an employee that already has no trust.

There is a difference to attributing a problem to the cause and shifting blame. A retail manager is responsible for everything under his/ her roof. Usually blame can be placed squarely on the manager for poor communication, lack of discipline, no motivation (other than toxic motivations), and poor follow-up.

One big-box retailer for which I worked had a team of department supervisors that consistently blamed a night-shift supervisor for their woes. This late-night supervisor wasn’t around for impromptu management meetings and therefore couldn’t defend himself.

The general manager fell for this blame. When the blame became to much the GM felt it was time to confront the night-shift supervisor. The conversation quickly became hostile because the supervisor was insulted by charges against him.

After the GM saw for himself what the night-shift crew was actually doing (working very hard, working very competently) he made sure to include the night-shift supervisor in all meetings. He also put all of the other supervisors under a magnifying lens. They had lost credibility with the GM and their jobs got harder.

The associates found out what happened and the supervisors lost the respect of the people they needed most.

Gossiping can be a fun way to share information about others and while away some time. But more often, “it is used as a form of passive aggression, as a tool to isolate and harm others” (Wikipedia via Answers.com, 2008). This is particularly true when managers partake of gossiping.

I’ve been devastated when I heard a manager launch into a gossip session about an associate. If the manager is talking so harshly about that other person, what is he/she saying about me? I’ve heard managers call associates names like “slut” and “fag” while telling some tasteless story about an associate.

Retail managers are suppose to be leaders. How can they maintain credibility if they mean their wards harm?

This is the new millennium. Everyone in the United States should know by now what inappropriate behavior is. So I won’t belabor this point much. I will say that managers should never have such low character as to use suggestive language or other suggestive communication.

Some managers still do. Stop it.

This is one of the most annoying behavior traits that I see in retail managers. It annoyed me 20 years ago; it annoys me now. I even annoy myself because I’ve done it.

Martyring oneself emotionally is to take on a “poor me” attitude. A manager who martyrs his or herself constantly tells the associates how horrible the job is, how long the hours are, how low the pay is, and how mean the executives are.

Martyr managers don’t stop at business. They have to tell everyone how awful their spouse is, how bratty the kids are, how the parents are so mad because they have to work another holiday and can’t go to a family function.

Now when a manager starts to complain about long hours or bad treatment by executives I respond, “You should quit.”

Being Either an Office or Hands-On Manager

There are two kinds of managers: office and hands-on. This comes from managers wanting to stick with what they enjoy and avoid what they hate. This can come from a lack of confidence in certain aspects of management.

For managers of small stores, it’s important to get on the floor and get work done. Usually, managers of drug stores or small mall shops have to roll up their sleeves and work. Some enjoy this too much or use it to avoid responsibility.

It is hard to plan, go over sales figures, track associate performance, and come up with well-thought-out ideas to increase sales and decrease expenses. A manager who avoids his or her office (usually a bench in the back room) will never achieve excellence.

Conversely, a manager who concentrates on office work will not have a strong picture of his or her staff. Things won’t get done. They won’t connect socially with associates. Again, they will not achieve excellence.

It’s okay to be a great stocker or salesman. It’s also okay to have a head for numbers and trends. But to concentrate on one aspect at the expense of the other will unbalance the store.

Balancing paperwork and floor work can also give the manager a better, clearer picture of the store. Like in the example below. If the manager did his job of tracking performance instead of blindly stocking shelves he could have prevented theft and fraud.

Personal biases are formed by our families, friends, and experiences. In it’s mundane form personal bias provides our personal taste and preference. In more dangerous form, personal bias leads to blindness and ignorance.

Here’s an example: I knew a manager who had a preference for one cashier. His perception was his favorite cashier was fast, took responsibility for her job, and was overall his star employee. He even nicknamed her “The Final Solution” because she seemed to fix everything.

When I first started working for this manager, I noticed he was not tracking employee performance. He had no logs on things like tardiness, register transactions, and up-sales. His perception was based on what he personally saw.

Turns out, his “Final Solution” was the worst employee in the store. She had the worst attendance record, the most requested days off, the most restrictions on her schedule, and was loosing hundreds of dollars a week in poor till balancing.

After I put a security program into place we caught her doing coupon fraud. She admitted to stealing cigarettes for months when Asset Protection fired her.

Here’s a list of the worst performance or morale building rewards I’ve encountered. Pushing them as a manager will result in loss of morale and credibility. Please, for the love of all that is good and holy, avoid them.

Saying, “Just kidding!” or laughing does not transform toxic communication into something good. Here are some topics that managers shouldn’t joke about:

Once again, saying “Just kidding!” does not make it all better.

Using humor to establish dominance puts a manager on the same level as a dog trying to climb to the top of a pack. Comments such as “So… ha, ha… I guess you don’t want to work here anymore because you’re always late! Ha, ha!” are put-downs, demoralizing, and will result in an immediate loss of credibility.

Sarcasm is awesome. It allows witty, intelligent people to express themselves at the expense of the unimaginative and self-important. Managers should never be sarcastic towards their employees. Sarcasm should be saved for the manager’s boss, such as the district manager. I can respect that. But never, ever, should a manager use sarcasm on an associate under her charge.

How does a manager know that he’s gone too far with humor? That’s easy: If you can tell the “joke” to an eight-year-old without hurting his feelings, then it’s probably okay.

How does a manager know he’s using “humor” to establish dominance? That’s easy, too. I call it the “f*** off” test. If you make a joke and the employee tells you to f*** off, then you’ve gone to far. Since most employees won’t tell a boss to f*** off, here’s some other ways they say it:

Performance punishing behavior is when you treat your best people like crap. Managers put their fastest, most reliable, most competent people on the worst jobs.

Most managers I’ve witnessed in performance punishing behavior use the rest of this page’s headers as excuses to keep going: lies, bias, poor rewards.

Conversely, the same managers will let poor performers slide. They will make excuses for Suzy Comes Late or Johnny Does Meth in the Bathroom. But if Kristin the Superstar comes in three minutes late, then the manager goes into full lecture mode. This is unfair. As a manager, you will loose whatever credibility you have with either set of employees as being both a cold-hearted bastard and an easy push-over.