Infrared technology cuts Kroger checkout time. But at what cost to the staff? 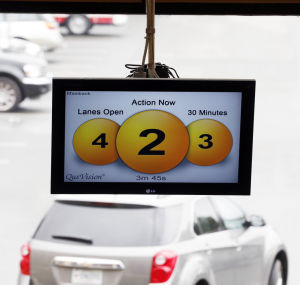 Kroger’s QueVision system tells employees (from left) how many checkout lanes are open, how many are needed and how many will probably be needed in 30 minutes

The technology is sometimes used by the military and law enforcement to find and track people who don’t want to be found or tracked, but in this case, the use of infrared body-heat sensors is a good deal friendlier.

Kroger just wants to get you through the checkout line more quickly.

In a world where customers have dwindling patience, grocery stores and other retailers are keen to keep their lines moving.

Cincinnati-based Kroger started rolling out its QueVision technology in 2010 and now nearly all of its 2,419 stores – 97 percent – have it. It’s in all the company’s 18 Richmond-area stores, Kroger spokesman Keith Dailey said.
Developed by the British firm Irisys, QueVision has monitors above Kroger entrances and cash registers counting customers entering, standing in checkout lines and leaving, Dailey explained.
“The system sends information to a computer that has an algorithm specific to that store,” he said. “Using data collected in the most recent 10 weeks, it predicts how many checkout registers will need to be open.”
Dailey said the calculations keep a store 30 minutes ahead of checkout traffic, taking into account customer shopping patterns.
For example, he said, a Sunday afternoon customer is likely to take longer, shopping for the week ahead. A customer shopping Friday at 5:30 p.m. is more likely to make a quick stop to pick up a six-pack on the way home.
“But that varies from store-to-store,” he said, “and the system’s calculations are unique to each store.”
So how’s QueVision working? Dailey said it has made a big difference in customer wait time – defined as the time between a customer’s arrival at a checkout line and the moment that customer starts putting products on the conveyor belt.
“Before we had the system, the average wait for Kroger was four minutes,” he said. “Now the average is 26 seconds. That’s for all Kroger stores at all times of the day.”
And four minutes is a tipping point for grocery customers, according to a study by M/A/R/C, a Texas-based market-research firm.
First done in 2007 and updated a year later with similar results, the study showed that more than 40 percent of grocery shoppers who had to wait more than four minutes would consider changing stores.
Dailey said customer complaints were what prompted Kroger to pioneer QueVision in the U.S. The system now is in a 32-store grocery chain in Hawaii. Some major European chains use the technology.
“We kept hearing from our customers that they didn’t like waiting,” Dailey said. “We began asking ourselves what we could do to fix this.”
The system doesn’t collect any personally identifiable characteristics, thereby avoiding consumer resistance to being tracked in ways that may record shopping decisions and other data, he said. “It just registers a blob of heat,” Dailey said.
Other retailers use technology to help speed the check out process.
Walmart started experimenting in December with a “Scan & Go” app for customers with iPhone or Android devices.
A customer takes their phones, scans bar codes of products, then bags the products. When the customer gets to the checkout line, the information is transferred from the phone to the store register.
The customer doesn’t have to put purchases on a conveyor belt and wait for a clerk to scan them.
Walmart spokeswoman Ashley Hardie said the system is in use in 200 stores in 14 markets – it hasn’t come to Richmond yet.
Walmart has about 4,000 stores, Hardie didn’t have a timetable for a rollout. “It’s still a test,” she said. “At this stage, we’re getting feedback from our customers.”
She said customers especially like being able to keep track of how much they’re spending as they make purchases.
“So far, more than half the people who use the app use it again,” she said.
A recent food-shopper survey reported at Retailcustomerexperience.com, an industry Internet publication, found that 16 percent of shoppers use their phones for grocery lists, 13 percent check recipes in the store. Nearly one in 10 use their phones to check coupons, track spending and/or check prices.
Martin’s Food Markets provides EasyShop hand-held devices to customers in 16 of its 200 stores. Shoppers scan items and bag their groceries as they shop. At the checkout counter, the scanner tells them what they owe and the customer pays the bill.
For instance, Martin’s stores in Staunton, Waynesboro and Stephens City have the EasyShop technology.
None of the chain’s 24 stores in the Richmond market have it, but spokesman Chris Brand said the 74,000-square-foot store scheduled to open next spring on Midlothian Turnpike in Chesterfield County may be an EasyShop store. “We’re looking at our options,” he said.
In all Martin’s stores, with or without EasyShop, the chain relies on a classic approach to keeping its checkout lines short and efficient, Brand said.
He said the chain has a “robust scheduling system” that makes maximum use of employee time. Cashiers get thorough training and quarterly refresher courses. Supervisors monitor stores’ front-end operations and make the best use of checkout lanes.
“And we’re big believers in having plenty of baggers at the ready,” he said.
Brand also noted that Martin’s EasyWeigh self-service scales give customers ready-to-scan printouts. And he said the company has state-of-the-art hand-held and counter scanners at the checkout line.
High-tech isn’t always met with 100 percent high enthusiasm.

If a store doesn’t respond quickly enough, it gets a mark recorded against it.

QueVision was a subject up for debate on more than one employee blog.
Some Kroger employees liked it. Others complained that the emphasis on staying ahead of checkout traffic was overdone, pulling them away from important duties in other departments.
Kroger’s Dailey said QueVision’s success at addressing customer wishes for less time spent in checkout lines has been worth the period of adjustment.
“This is a way to give customers more value,” he said, “to give them back more of their time – five minutes to get to a kid’s soccer match on time, five minutes to get home and start preparing a meal for the family.”