The Ugly Walmart Truth: Some Managers Treat Workers Like Dirt

Low wages, no benefits, irregular schedules, and unreliable hours are just some of the horrible working conditions most Walmart workers have to endure. Yet when I asked some of the workers what they consider the worst part about working for the corporation, they didn’t mention any of these wretched labor practices. Instead, they all gave the same answer: disrespectful managers.

These managers have committed offenses big and small. Some have refused to return a “hello” from their workers. Others have forced workers to do heavy-duty work despite medical conditions and pregnancies. And worse, one manager even told an African-American worker that “he’d like to put [a] rope around his neck.”

When workers try to better their working conditions through OUR Walmart, a community of current and former workers, managers’ behavior often gets worse. A manager was even recorded telling workers he “wanted to shoot everyone” organizing for change.

This leads to one of two conclusions. Either Walmart is eerily talented at hiring the meanest bullies on earth, or there is something about the corporation’s culture that manipulates its managers into treating workers in a subhuman fashion. After reading leaked documents that exposed the way Walmart trains its managers on how to deal with OUR Walmart workers (hint: by misinforming and tattling on them), I developed a hunch it was the latter. Then “Dan,” an assistant manager for a Walmart store in the Midwest, confirmed my intuition.

I spoke with Dan (a pseudonym) under the condition of anonymity. (Managers are not protected under the same federal labor laws as other workers.) Well-spoken, polite and admirably humble, Dan has been a manager at Walmart for several years and said the warped corporate culture comes down to how Walmart views its workers.

“We don’t treat people with respect,” Dan said. “The stigma within a Walmart facility, and even some of the really good ones, is still, ‘We need bodies.’ But, we’re human beings, we’re not bodies.”

That outlook—that workers are just cogs in a massive capitalist machine—drives Walmart to give workers often unfeasible workloads created to squeeze out every drop of their labor. And managers are responsible for making sure these workloads are completed.

“Even when we talk about the facts, the figures, the data—even our own company programs that are used to assess how much a workload is—whenever the numbers don’t match up, we’re still expected to get everything done 100 percent,” Dan said. “And as managers, we’re expected to stay, to the point where I’ve worked 14-or 16-hour days on a regular basis.”

Faced with this extreme pressure, managers often pass their anxiety on to workers.

“Walmart has forced managers into bad positions because we’re overworked and overstressed and not handling it the best way we should and sometimes we take it out on associates,” Dan said.

Dan admits he’s not perfect and has occasionally snapped at workers. He tries to direct his frustrations to upper-management, but ultimately, they give him unusable advice instead of practical strategies for managing his staff’s workload.

“They say, you’re managers. I pay you to solve problems, and if you can’t solve the problem, I need to pay someone else to do it.”

Dan said the higher-ups harass him on a constant basis about not working hard enough. As some form of protection, Dan began keeping notes on his workload, the amount of workers needed to complete it, and the standard company time it takes to get done. That way, when he’s told he hasn’t done his job, Dan can say, “Show me the data.” His supervisors can’t. This is also why Dan has not faced administrative action for his supposedly poor performance. But he is punished in other ways.

“I say, you can’t tell me based on these facts and based on this math that I didn’t do my job for the evening,” Dan said. “But they still will. And they’re designed to keep it verbal and they’re designed to make it personal. Because of the frustration I feel constantly being told I’m not performing, I’m not good enough, I don’t want my associates to feel that way when I know they’re performing.”

But many managers do make their workers feel that way. So what separates the respectful and the disrespectful managers at Walmart?

“It’s whether or not you drink Walmart’s Kool-Aid,” Dan said. “If you do, you’re going to go on with the solidarity. I don’t know how many meetings that I’ve been to that they say, whether we agree or disagree at the end of this meeting we are one team and we will have one direction. Deviation will not be tolerated. It’s also the fear of losing your job or the fear of administrative action controls you.”

It doesn’t help that Walmart incentivizes this by-any-means-necessary behavior.

What this often means for workers is constant harassment and degradation from management. Dan told me about a recent situation where a manager he works with was hounding one of their workers, nearly screaming at him, because they were far behind on unloading a truck. The worker, who consistently performs at a high level, couldn’t understand why he was behind either.

“He said, I don’t know why I’m a failure today,” Dan said. “Now this is a grown adult really on the verge of being in tears, and I’m like, that’s not appropriate.”

Dan managed to calm the other manager down and figured out that they were unloading the wrong truck. Instead of being behind, they were actually far ahead.

Belittling workers like this is no way to run a business, Dan said.

“You can only hold power for so long before either the fear holds no more power or rebellion sets in.”

Dan has already reached that point.

“I’ve gotten to a point where fear no longer runs my life, but there was a point in my career when it was,” Dan said. “At one point, I didn’t take a day off for 12 days, and that’s working 14-hour days. That’s how much I let the pressure get to me. And that does a lot of other things to a person. It has personally messed up a lot of things in my life. My last marriage kinda ended over the amount of work I was putting into my job.”

Walmart workers have had enough, too. That’s why some are organizing with OUR Walmart for better working conditions. But the corporation is also organizing. It has developed a plan to deal with OUR Walmart and has trained managers to carry it out. Some of these training documents were leaked early last year. Dan confirmed the documents’ statements on Walmart’s official response to workers’ organizing.

“If an associate asks about OUR Walmart, they tell you to call their Labor Relations Hotline and say to the associate, ‘They’re like a union. I don’t think we really need a union. We’re pro-associate, not anti-union’ and ‘You’re going to pay your hard earned money to someone to speak for you when you can speak for yourself.'” (OUR Walmart has an optional $5 monthly dues.)

Unofficially, the higher-ups at Walmart are also telling managers to hamper the movement.

“We were told on a conference call, ‘We don’t want this OUR Walmart movement, and you are directly responsible for whether they show up. If you’re thinking it’s going to come in, you got to start looking at the individuals who are bringing the influence in and figure out what’s going on,’” Dan said.

Dan said one of his general managers was so paranoid he made his managers call him immediately if they heard a worker speak about OUR Walmart and provide documentation of every worker that employee was in contact with each day.

Managers are also encouraged to be particularly mindful of these employees’ work performances. Dan said sometimes managers will chastise workers they think are with OUR Walmart for trivial matters, like resting for a few extra minutes during a break.

Dan recently contacted OUR Walmart hoping that, as a manager, they would let him join. He became a member last week.

“I support OUR Walmart. And I came to that decision when I reached the point where I wanted to do anything I can to help associates not feel the same way I do when I’m at work and not feel the way I feel about myself in their job.”

Dan said he hopes associates remember that managers are people, too.

“Your boss may be just as miserable as you are,” Dan said. “And they may not have the answer on how to fix things, and we don’t always agree with what’s going on. I would hope more associates would recognize that in managers and more managers will come out and say ‘Look, I agree this is wrong. I want to do what I can to help my associates.’ I would rather bridge this gap than create more of a friction.” 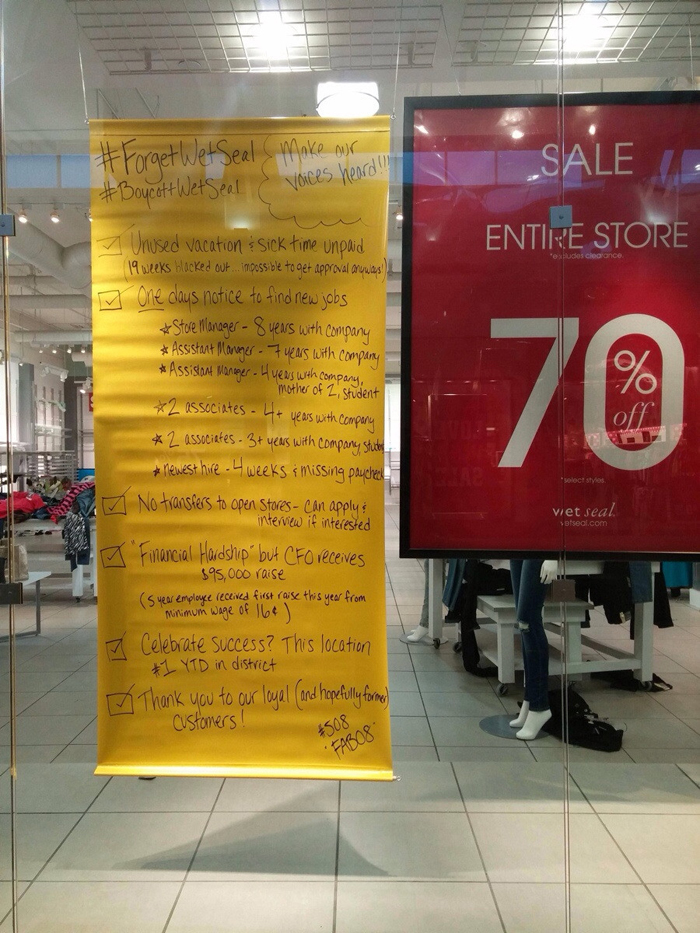 If you have ever been an overworked, underappreciated retail employee, this story will make you happy.

Some pissed off workers at the Wet Seal store at the Northgate Mall in Seattle posted this sign yesterday in their storefront. The huge yellow banner outlines all of the mistreatment the store’s employees have endured since they started working there.

Among the highlights: refusal to pay for unused vacation days that were nearly impossible to take due to blackout dates; the one-day notice firings of long-time employees; the lack of transfer opportunities with other Wet Seal locations; 16 cent raises for five-year employees; $95,000 raises for the CFO; and much more.

Read the whole thing for yourself. Hopefully this helps the less fortunate employees who are suffering from these horrible policies. The hashtag has already started popping up on Twitter and, depending on the swell of support online, it’s only a matter of time before the company responds.