working in retail Archives - I Hate Working In Retail

16 infuriating things about working in retail

WORKING IN RETAIL can be really tough.  Yes, there are days when your co-workers are sound and your customers are lovely, but all too often that is not the case.

Sometimes people are jerks, sometimes your boss needs to get stuffed and sometimes the job is a pain.

Here are 16 infuriating things about working in retail.

People trying things on just for a laugh

Oh yeah.  Go ahead, have your gas craic trying on loads of stuff.

It doesn’t matter that I’ll have to tidy it all up, put it on hangers and put it out on the floor again.  As long as you have your fun!

No matter what shop you work in, no matter what kind of security you have, you will know the shoplifters, and they will be a pain in the ass.

I’m sorry that the article of clothing you purchased in an entirely different shop didn’t work out for you, but kindly stop spitting in my face!

They should never have been allowed to be in charge of anything, let alone you.

Being forced to do pointless things by your boss

Purely so they can wield the aforementioned power.

People trying to return things that had clearly been worn

It’s covered in makeup and it stinks of cigarettes.  Do they think you’re stupid or something?

Every day, you are forced to spend ages arranging clothing in order of size, only for it to be immediately messed up when customers got involved.

Customers who ignore the fact that it’s past closing time

They don’t care that the shop just closed, they want to try on 17 items.

Not being allowed to use certain lifts/escalators/entrances

God forbid that a customer should see you using the same doors as them.  They might forget for a moment that they’re better than you.

People leaving their rubbish in the changing rooms

Do you work in retail?  Do you need to vent?  Tell us about your pain in the comments. 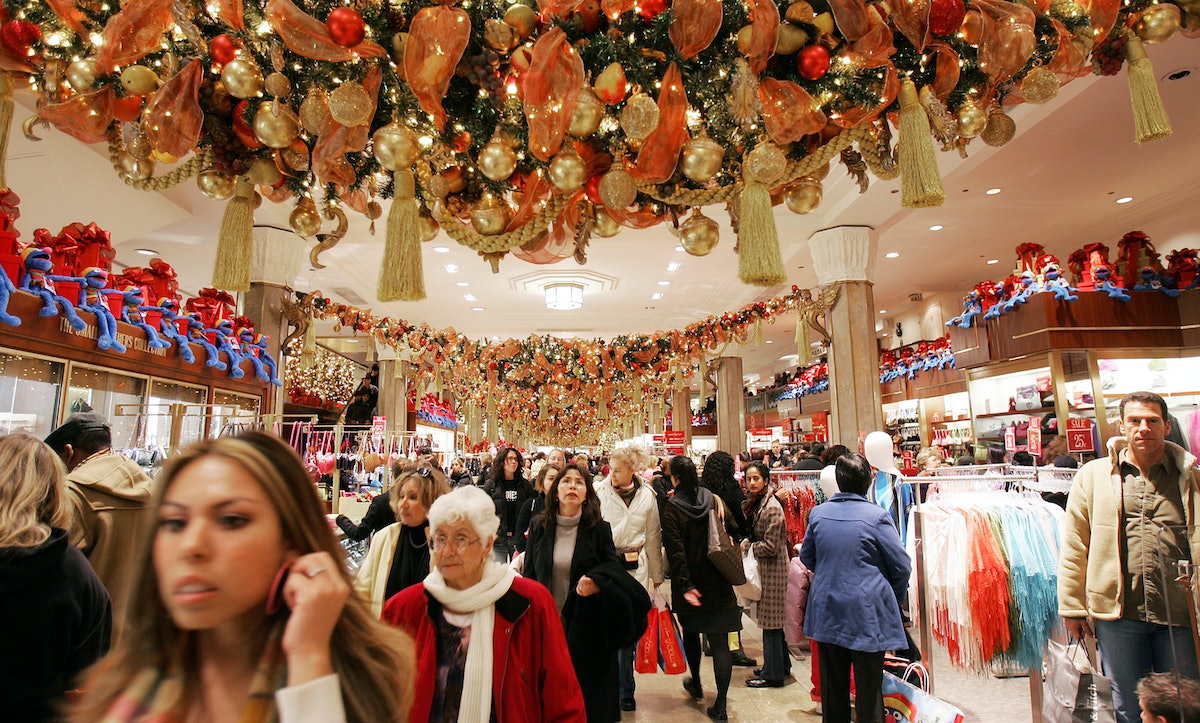 If you have ever held a job in retail during the holidays, you’re aware of the mind-numbing absurdity of topical capitalism. This is perhaps best captured in Omaha, Nebraska comedian and slam poet Ben Wenzl’s “Working Retail During the Holiday Season,” spoken-word poem, which could be alternately titled “It’s Beginning to Look a Lot Like Oh My Effing God Are You Effing Kidding Me,” which functions as a foul-mouthed homage to the collective toils of anyone who’s ever endured this unfortunate but inevitable season. Wenzl’s performance is relevant, impassioned, and candid as he spits the holiday hatred felt by all of us who’ve worked at the Gap or similar spots over Christmas break.

If you are not a person who’s had the soul-crushing privilege of working end-of-year customer service, allow me to break down some of the more insufferable highlights: a maximum number of three holiday albums cycle through one after another on your employer’s PA, every day, incessantly, for the duration of a three-month period; also of note, people are commercially coaxed to buy far more than they can reasonably afford, leading to a high influx of returned merchandise and subsequent cuts to your commission (if you’re fortunate enough to make it); and let us not forget the annual reel of holiday sale brawls (which, by the way, are not as hilarious as you may think).

So this, dear reader, is why Ben Wenzl is all of us. “If that customer returns one more goddamn item,” Wenzl says, “I swear to you I’m gonna break every candle in this goddamn f*cking store, and then roll around on the shards of glass covering the entire surface area until this store floor is a bloody Jackson Pollock.” We hear you, dude.

Stoke your holiday vitriol fire by watching the video below.

The Reasons Working in Retail Will Drive You to Madness

To be successful, you need to persevere to achieve your goals.  Just kidding, it’s all about who you know – and you can’t deny that fact.  So what happens when losers like me don’t have the right connections?  Well, the world is full of throw-away jobs, and they will be your primary source of income until you gain friends in high places.  But for now, you’re stuck faking a smile to people who spend a fortune and drive away in a brand new Porsche.

This doesn’t apply to the majority of retail stores, but it’s certainly something that you’ll have to deal with if you’re like me.  I currently work at a popular designer clothing store, which I won’t name for the sake of my employment.  The mall that I work at is in an affluent area, so every five or so cars you see will be a Mercedes or a Lexus, with a few Ferraris and Maseratis thrown in for good measure.  The place reeks of money.

These rich people come into my store already carrying Nordstrom and Louis Vuitton bags, and then they go on to spend more money in one transaction than I make in two months.   When I first witnessed this, I thought to myself, “Wow, it must be nice to be that well off.”  But after a few thousand times, my thought process shifted to “I’ll never be that successful.  I’m such a goddamned failure.”  However, this doesn’t mean the 1% are arrogant pricks like you’d expect.  Some of the nicest customers I’ve encountered were among this demographic.  The only reason I hate interacting with them is because their mere existence makes me feel like a waste of life.  It many not sound like something that will affect you, but after a while, you’ll be reaching for the nearest bottle of booze and the nearest gun after every shift.

Bad customers are a mainstay in the universe.  It doesn’t matter whether you work at Wal-Mart or Prada, you’re going to encounter the annoying bastards who think it’s your fault that the company charges so much.  I refer to them as Price Nazis.  These people are mad that they can’t get a discount on a DVD, or a reduced price on a t-shirt that they clearly sabotaged and claim it was like that when they found it.

They’re going to vent this unparalleled rage upon you, and there’s nothing you can do but tell them “I’m sorry, we can’t do that.”  When you say this, it will only make them angrier.  They’ll ask to speak with your manager, who will tell them the exact same thing.  If you’re lucky, they’ll just roll their eyes and storm out of the store.  If you’re not lucky, they’ll throw every single curse word in the English language at you, brag about how much better they are than you because you’re still working in retail, and they might even approach other customers and loudly tell them that your customer service is horrible.  I’m not exaggerating, because I’ve seen it before.

On a similar vein as the Price Nazis, the Discount Fetishists love nothing more than grabbing everything in the store, shoving it in your face and asking for a discount.  When you say no, they get a look in their eye resembling someone who just learned they have colon cancer.  When you direct them to the sale section of the store, they don’t bother looking for anything because to them, a mark-down is just not the same as a discount.  Eventually, they’ll leave without annoying you further – unless they’re the Barterers.

The name is pretty self-explanatory for these people.  They’ll continue to try to convince you to bring the prices down.  Some of them will even try to offer services in exchange for your coveted employee discount.  One customer in particular seriously offered me a pair of Beats headphones if I bought some items for him with my discount.  I obviously declined his offer, and sternly told him to go find someone who is dumb enough to risk their job over such a meager bribe.  Honestly, there are only a handful of people I’d risk my employment for,  and they are Mila Kunis, Scarlett Johanssen, Mila Kunis and Mila Kunis.

If you’re unlucky enough to have open availability, you are going to be scheduled for shifts that can literally kill you.  Last month, I worked from 4pm-1am one night rearranging the store.  The next day I had to come in at 5am to finish what we started doing the previous night.  I live roughly 25 miles away from my store, so I have to leave about an hour early to beat the morning commute traffic on I-880.  So that meant I had to wake up at 3:30am to get to work on time.  Do the math.  I seriously was only able to get a half hour of sleep that night before I had to wake up and get ready again.  And I’m not the only one who has to deal with this.  One of my managers lives A FUCKING HOUR away from our store, so you can imagine the how awesomely horrible her days are.

There is no reason to be physically and mentally tormented to such a degree.  The only silver lining for this situation is a bigger paycheck, so tha–oh wait, retail pays CLOSE TO NOTHING.  In exchange for years being taken off of your life due to sleep deprivation, you get just enough money to pay the bills.  Sometimes.

If everything I’ve already mentioned isn’t enough to make you snap, this one certainly will.  Every entry-level employer will tell you “this isn’t a job, it’s a career!”  If you don’t feel the powerful urge to punch them in the throat when they say this, congratulations, you’re fucking insane.  It’s a safe bet that the employees don’t want to work there, and none of them see it as a career.  This applies to all retail stores, to fast-food restaurants, and any other job that doesn’t require a college degree.  Seriously, the next time you find yourself at one of these locations, observe the employees.  Do they seem like they truly enjoy being there?

And don’t think it’s any better for the managers and bosses.  I’ll guarantee that exactly none of them grew up with the goal of becoming the manager or the district head-honcho.  While their pay might be somewhat decent, the amount of work they have to endure just isn’t worth it.  But the worst part?  This is their CAREER.  This is what defines them.  If they were to be killed by a drunk driver tomorrow, the newspapers would say “Target Store Manager Killed In Car Accident.,” or “Macy’s Employee Hit By Car.”  It doesn’t matter if they’ve been there for years and worked their asses off to move up, they’ll still be ridiculed for not having “a real job.”

Now imagine how it is for us regular employees.  If I were to be killed while employed at my current job, my family would probably feel shame for my lack of accomplishments rather than sorrow.

So the moral of this story: go to college.