Walmart Security Guard Shoots Alleged Beer Thief in the Back -

Walmart Security Guard Shoots Alleged Beer Thief in the Back 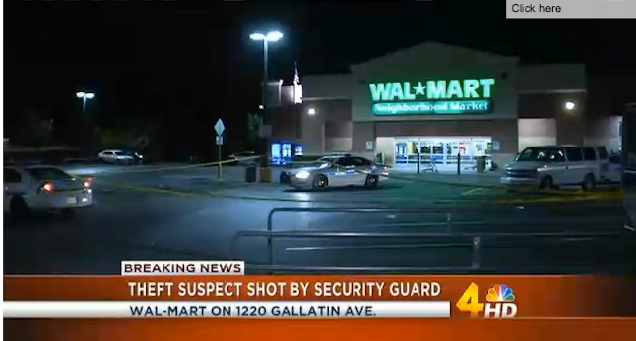 A Walmart security guard in Nashville, Tennessee shot a man last night who was allegedly trying to steal a case of beer. According to WSMV, police are now investigating whether or not the guard was “justified in using his weapon.” The guard hit the man in the back.

The security guard was patrolling the parking lot when he confronted the suspect as he was getting into a car.

Shots were fired by the security guard into the car as it began to drive away.

The suspect was shot once in the back. … A female passenger in the car was unharmed.

The man is in serious but not life-threatening condition at Skyline hospital. WKRN reports he drove himself straight to the hospital.