WHY YOU SHOULD NEVER STOP TIPPING YOUR SERVER, FROM THE BITCHY WAITER -

WHY YOU SHOULD NEVER STOP TIPPING YOUR SERVER, FROM THE BITCHY WAITER

About a month ago, professional wrong person (ED NOTE: and amateur Thrillist senior writer!) Dave Infante wrote a story about how people should stop tipping their servers so that, eventually, the country will understand how ridiculous our tipping system is and how the system needs to be changed. Many people have asked me to respond to this nonsense, and the time has come for me to address it. No one is debating whether the system is perfect. It isn’t; some customers don’t feel that a server’s income is their responsibility and that the restaurant should pay their staff a living wage, while some servers don’t feel that they should bust their ass giving impeccable service only to have some d-bag leave them a 10% tip. In a perfect world, everyone would get paid a wonderful salary for doing what it is they love to do. 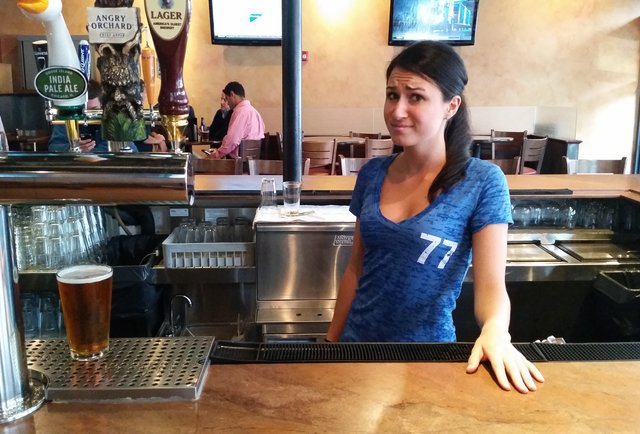 Tipping does not actually hurt the customer

No, tipping is not a legal requirement, but it is an expectation. No one who grew up in this country can pretend they don’t understand that when going out to eat, they will be expected to leave a 15-20% tip. Tipping may slightly hurt the customer in one of three ways:

Not tipping hurts the server

Yes, not tipping really does hurt the server. Not only are they making the hourly pittance of $2.13 in some states, they aren’t getting any tips from cheap a-holes trying to prove a philosophical point. The thing is, servers have to tip out other people at the end of the day and much of the time, that amount is determined by what is sold and not what they made in tips. In other words, servers have to tip a percentage of sales to other staff like busers and food runners even if they didn’t make enough money to cover it. It is possible for a server to lose money by waiting on a table that stiffs them because whether or not they got a tip from that table, they might still have to tip 3% of what that bill was. It will come out of their own pocket and that can hurt.

Sucks for me, sucks for you, doesn’t suck for… who?

I’ll tell you who it doesn’t suck for: the restaurant. The restaurant doesn’t give a shit if the server gets stiffed as long as the bill is paid. If there wasn’t enough money to cover everything on the check, you can bet that a manager will void off a couple of sodas or some other inconsequential item to make sure the bill is covered, but you can forget about the manager doing something so the server will make a tip. Whether a customer tips makes no difference to most restaurants. 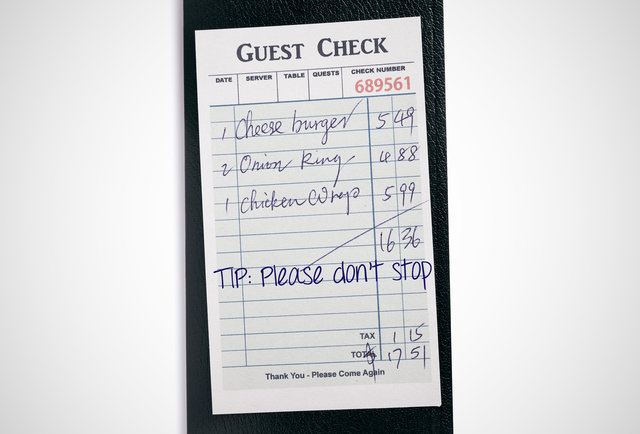 So what should you do?

Keep tipping. If everyone stopped tipping, the whole country could possibly grind to a halt. Imagine, if you will, the following scenario: on Monday, no one leaves their server a tip. Every service person goes to their job and comes home with absolutely no money except for their paycheck which is maybe about $30 a week, if they’re lucky. On Tuesday, again no one tips and the servers just assume it’s a bad week. Wednesday comes around and the servers have already gone into their emergency jar of coins to pay for their groceries the night before. They again leave their job with no money. On Thursday, they arrive to work, angry and desperate. After a few more customers don’t leave them tips, the servers revolt, flipping tables, smashing plates, and breaking glasses. Restaurants across the country are in shambles and unable to open for business on Friday. That’s right, every restaurant is closed on Friday, so now where are you going to go for happy hour wings and half-price nachos after work? NOWHERE, BECAUSE THE COUNTRY IS IN RUINS!

I get that Mr. Infante was trying to prove a point and it’s great that he’s standing up for the rights of servers, but there must be a better way to create change in our tipping customs. To discontinue tipping will theoretically make it better in the long run but who wants to be on the front lines of that battle? No server wants to stand up for a cause if it means they don’t get tipped ever again and eventually have to find a new job. I equate it with the way that Black Friday has slowly encroached on Thanksgiving Day. Everyone is against it and no one thinks it should happen, but as soon as Best Buy opens up on Thanksgiving at 5pm, you know there’s going to be a sh*t-ton of people there who want to buy a flat-screen TV. You can tell people to stop shopping on Thanksgiving Day, but people aren’t going to do it. Precedents have been set and there’s no turning back: Black Friday now starts on Thursday and servers expect a 20% tip. F*%$ing deal with it.

[Editor’s note: Due to the overwhelming response after his original piece, Dave followed up to tell the world how he screwed up and what he learned, which you can read here.]

The Bitchy Waiter lives and works in New York City and has been waiting tables pretty consistently for almost 25 years. He has discovered that writing stories on the Internetabout annoying customers is better than poking the annoying customers in their eyes with forks. He enjoys The Brady Bunch, The Facts of Life, and cocktails almost as much as he hates your baby. Follow him: @bitchywaiter.