6 Nice Things You Do While Shopping, That Actually Drive Retail Workers Insane -

6 Nice Things You Do While Shopping, That Actually Drive Retail Workers Insane 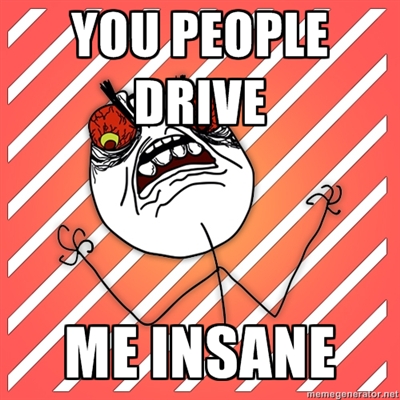 I’ve worked for too long in retail. And honestly, the majority of people I’ve helped have been good, decent people. Granted, there are a lot of horrible people, but that’s not news to anyone. In an attempt to help the nice people, I would like to point out some things which they do which are actually making retail workers sick with frustration. Because you don’t want to get them angry, right? You appreciate their hard work, their low pay, and the fact that they’ve helped you find that perfect sham wow for your apartment. So here are some things that people do to be kind, but which actually backfire hideously.

First, let me set the scene. The average retail worker does not do what they do because they want to. No one I know dreams of being a retail worker. They have do, for a myriad different reasons. In order to keep their jobs, they are given tasks which they themselves despise, and which lead to conflict with customers. By the time you encounter one in their work environment, they have been yelled at, insulted and humiliated, and were forced to respond by saying “what else can I do for you?” or “have a nice day.” So when you meet one, they’re already sensitive and angry. Moreso, they expect to undergo the same debasing experience, and in their mind you could be the next to insult them and say “I hope you lose your job.”  Every time they hear the phrase “Do you work here?” it’s an invitation for debasement. Which leads to the first nice gesture that actually drives retail workers insane.

No retail worker hates it more than when a customer walks up and just blurts out “Where are the Children’s books?” Or even worse, just “Children’s books?” It’s common courtesy to address someone properly first, with maybe a “hello” or “how are you?” But just like “How are you?” certain phrases have lost their meaning. When someone asks that, they probably don’t want a full story about one’s state of affairs and life. It’s just a greeting. In the retail world, this opening phrase has become “Do you work here?”

Most people know this is a silly question. The retail worker either has a giant-sized name tag, or an ill-fitting polo shirt with the company logo emblazoned onto it. Many even have to wear aprons, perhaps to absorb the blood stains when they finally lose it and kill someone. Everything is done to make it obvious who is there to help people buy products, and thus make money for the company. One of my coworkers even tried an experiment. Whenever someone said “Do you work here?” to her, she replied “No.” The customer blinked, then asked the question anyway. They knew she worked there, yet asked the question anyway.

I myself walked into a store, approached someone in a big colorful uniform, and heard myself saying “Do you work here?” I kicked myself. Hard. I did it mentally, but with vigor.

Why do we ask this when we know the question? I think it’s just the easiest way of addressing someone and indicating that we need help. What we actually mean is, “I know you work here, but I want your attention and want to indicate that I need help.” Over the years, the phrase “Do you work here?” has become an idiom in the shopping experience.

When someone asks this, it drives retail workers insane with frustration, even if they don’t show it. Why is this question so aggravating? It’s not just because the question is pointless and silly. People get pointless and silly questions all the time. It’s because they get that question literally at least a hundred times every day. Let me put it this way. Imagine something you enjoy eating, say a candy bar. Imagine eating one hundred candy bars every day for a week. You’ll probably grow to hate it. Now imagine something you don’t like, such as three day old sushi. And imagine eating that a hundred times every day.

So yes, politely asking if someone “works here” is driving the retail worker nuts. Next time you want their attention, just take a moment, and say something else. “Can you help me?” is a good choice. Or, “Hello, where is . . . .”

This is going to seem completely counterintuitive. Every uniform or badge or tag has the worker’s name displayed. This means they want you to know their name, right? Wrong. The company wants you to know their name. So the store can seem more friendly. Regardless, let’s say you walk into a store, and are greeted by an employee. They have a nametag which reads, let’s say “Dan.” And in order to be smooth and friendly, you say, “Hello, Dan.” Given the circumstances, this seems like a nice, personable thing to do.

I can tell you from experience that being called by your first name from a stranger is, in reality, really, really creepy. I don’t care that my name is on the front of my shirt. This isn’t a party or a convention. This is work. You are a stranger. Having someone you don’t know suddenly address you by your first name is very unsettling. In addition, I’ve found most people who do this are in fact actually quite creepy, or at the least unsettlingly eccentric. After using my name once, they tend to use it over and over again. “Hello, Dan. Can you help me, Dan. You’ve been so nice, Dan. Where do you live, Dan?” This has happened. If you work retail, this probably happened to you. And you didn’t like it.

Almost every sane individual loves to laugh. A good laugh can make a horrible day a good one. Laughter, in my opinion, is one of the best guilt-free uppers that exists. When a customer makes a joke or tries to make a retail worker laugh, that’s a good thing. With one exception.

Ask anyone who has been a cashier for even a day, and they can tell you they’ve had this experience. And they hate it. The product is placed in front of the cashier. She or he scans it over the laser barcode reader. The scanner doesn’t read the barcode, so the cashier must scan it again. After a few tries, the products still doesn’t scan. So the customer breaks into a giant grin, and says, “That means it’s free, right?” Pause while the comedian du jour waits for a laugh.

Problem is, the jokes really not that funny. Maybe twenty years ago, when scanners were invented (no, I didn’t check my history, this is just a guess) this produced a chuckle. But not anymore. What’s worse, the one making this joke usually waits for a laugh. So the cashier can either glare in disgust, which is bad customer service, or fake a polite smile. We’ve all faked a laugh at a bad joke. But again, this happens a hundred or so times every day. Want to tick off the cashier? Make that joke. Want to genuinely amuse them? Come up with a new one.

Retail workers are busy. They have dozens of people to help. It is normal for them to have two or more customers waiting for help at the same time. And they know that the longer the customer has to wait, the more impatient they will get, and the more likely to harass and belittle the worker if something goes wrong. Time and speed are essential, if only for preserving self-esteem and more importantly one’s will to live.

So imagine the frustration when someone asks for something. But rather than just saying “Where can I find the bath towels?” they say, “You know, I was in Tuscany on a family trip with my in-laws, when I stayed at this hotel and found the most wonderful bath towels, and upon returning home I tried to . . . . .” Trust me, unless you’re Ruth Reichl or Anthony Bourdain or any other great story-teller, they don’t care. You’re also wasting their time. And increasing the chances that they will be yelled at when they move on to customer #2.

Companies keep thinking of ways to make more money. This often involves asking their employees to push something, like an extra impulse item, or a membership card. To ensure that everything is done properly, employees are usually given a script to recite to get said customer to fork over money for this whatever miracle money-maker that will increase the bottom line.

Customers usually respond with a “yes” or “no.” Some sympathetic people understand that retail workers have to say this, and will probably be reprimanded if they get too many “no” responses. So they try to make the worker, and themselves, feel better by explaining why. “Sorry, I can’t sign up for the rewards card, because I just broke up with my girlfriend and I’m short on cash and I need to . . . “ whatever. Great. I sympathize. There probably is a very good reason to decline. Actually, considering most of the rewards programs and impulse items, there are hundreds of good reasons. We all know that. The cashier doesn’t need to hear the excuse. It doesn’t help their case. They’re not going to repeat the story to their supervisor in the hopes it will get them off the hook because they didn’t get enough people to sign up for the “magazine of the month club.” It just wastes more time, and again, it happens constantly.

A sincere smile and a pleasant “No, thank you” is much more effective when you want to be nice. Trust me, it will be appreciated, and might even make someone’s day better.

“Why are you closing?”

This one is more personal, and hopefully rare, because I work for a company that is going through liquidation. And I get this question a lot. People ask, “Why are you closing?” Now, I know they’re just curious and maybe want to make conversation to make the exchange more personal. but why on earth would someone ask this to someone who is losing their job?

This is just a flat-out painful question. Never mind that the answer would take half an hour. I once told someone “Do a Google search and find out for yourself.” They laughed, but I was pissed. Some even failed to take the hint and say “No, really, why are you closing?” You wouldn’t walk into an E.R and say to a gunshot victim “Why are you dying?” It makes no sense. Maybe it’s genuine concern. Sometimes I think curiosity gets the better of sensitivity. After all, I do work in New york City, where people are almost psychotically self involved.

So, there you have it. Thank you for letting me get this off my chest. And let me just say, if you really want to be a nice person, just don’t try so hard. Sincerely friendly and considerate people are a joy to help. I really mean that. So if you are nice, if you like making others smile and feel good for the sake of doing so, then just be yourself. Want to make the world a better place? You already have.